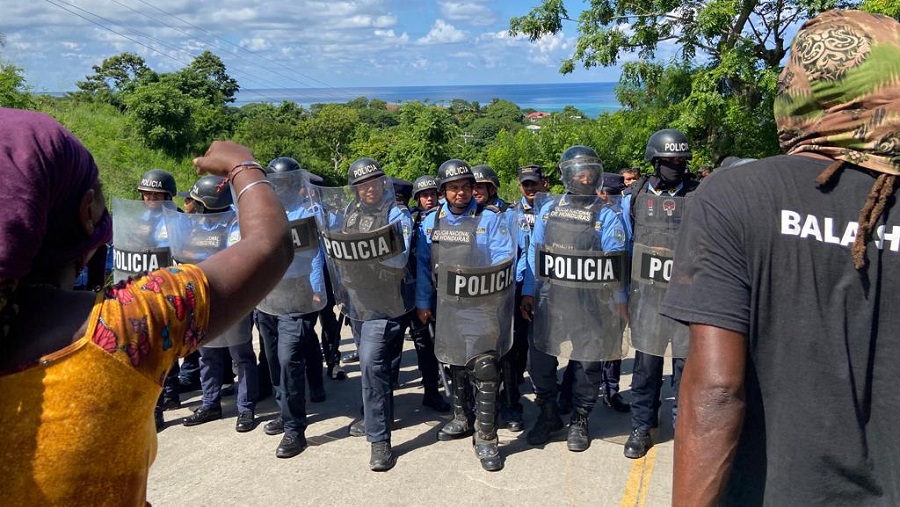 On Monday November 7 at noon, officials of the Public Prosecutor’s Office and a heavily armed military-police contingent with an alleged eviction order broke into the encampment of the Punta Gorda Garifuna community, a group engaged in a legitimate process of the recovery of their ancestral lands on Roatán Island.

Security forces violently attacked and burned down the encampment, including the community members’ personal belongings and documents. Moreover, they arbitrarily arrested six persons who were peacefully resisting, including our compañera Melissa Martínez, member of the coordinating group of the Black Fraternal Organization of Honduras (OFRANEH) in Roatán and the National Network of Women Human Rights Defenders in Honduras. Other women defenders arrested were Dorotea Arzu and Keyden Tishany Gonzales, along with the male compañeros Richard Armando Martinez, Abot Efrahin Sanchez and Augusto Moises Dolmo.

After being held for a day in the Coxen Holen police station, they were all taken to the Civil Court of the Bay Islands at Roatán, where the judge ordered their release under alternative sanctions for the offenses of aggravated usurpation of land, punishable by six to ten years in prison, and in one of the cases, attempted usurpation.  These alternative measures entail appearing in court every Friday to sign papers, and a ban against leaving the country or returning to the communal recovered territory.

It is important to underscore the security forces’ violent, racist intimidation, who refused to allow community members to rescue their belongings and personal documents from their homes. Among other abuses, the National Police physically and verbally attacked several defenders and seized the cell phone from our compañera Melissa Martínez while she was documenting the situation.

The police also took photographs and made videos of community people, exposing their identity and violating their security. Furthermore, they intentionally kicked over the clay pot containing a smoke offering, which is a Garifuna spiritual instrument utilized to seek community protection in the territory. According to information from the Committee for Defense of the Land of Punta Gorda, 50 persons suffered considerable wounds as a result of the police attack, and 15 were even more seriously wounded.

One matter of utmost concern is the recurring use of the security forces and institutions of justice of the Honduran government to attack and criminalize the Garifuna communities and take over their territory. It is also deeply troubling to observe the lukewarm, ineffectual response of the authorities responsible for protecting the human rights of the Honduran people. From 2021 to date, we of IM-Defensoras have activated 12 alerts due to attacks against rights defenders in Garifuna territory. These include the police harassment experienced by Melissa Martinez last April and the allegations against  OFRANEH Coordinator Miriam Miranda.

Ancestral rights of the first Garifuna community in Honduras

The Punta Gorda Community was the first Garifuna Community established in Honduras 225 years ago, even before the adoption of the National Constitution of Honduras. Although the community does not have ownership titles, its ancestral rights are recognized by the Convention 169 of the International Labor Organization (ILO), signed by the Honduran government.

On this basis, we of IM-Defensoras and the National Network of Women Human Rights Defenders in Honduras consider this eviction absolutely illegal. It constitutes an extremely serious violation of the legitimate right of the Garifuna community of Punta Gorda to recover its ancestral territory and to confront the racist, capitalist dispossession that threatens its survival, the autonomy of its community organization, and its cosmovision.

We condemn the violent, illegal eviction of the Punta Gorda community and demand an immediate end to the criminalization of our compañera Melissa Martínez, the women defenders Dorotea Arzu and Keyden Tishany Gonzales, and the male compañeros Richard Armando Martinez, Abot Efrahin Sanchez and Augusto Moises Dolmo, and we hereby hold the Honduran government responsible for any violation whatsoever of the lives and integrity of these persons.

We demand respect for the right of the Punta Gorda Community to recover its ancestral rights and further demand compliance with the decisions of the Inter-American Court of Human Rights regarding the rights of the Garifuna People in Honduras.

We call on the international community to extend solidarity to the Garifuna Punta Gorda Community and OFRANEH, and to support the demands of an end to the criminalization of these six persons and respect for the ancestral rights of the Garifuna People.