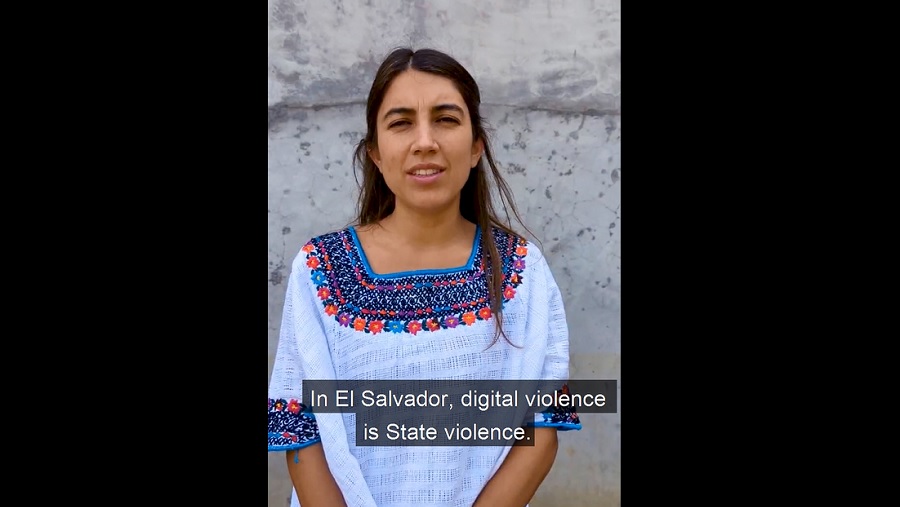 In a country where femicides are common and women are condemned to decades of imprisonment for involuntary termination of pregnancy, women human rights defenders and journalists are under the watch of the government and its allies who attack, difame, and stigmatize them throught public speeches and social media.

Between January and February 2022, IM-Defensoras registered 81 attacks against WHRDs in El Salvador. These attacks affected 40 women defenders. Of these 40 women, 1 in 3 experienced some form of digital violence. This suggests that digital attacks are the main form of aggression faced by Salvadoran WHRDs today – a pattern of violence that includes threats and sometimes culminates in physical attacks.

Arbitrary detentions, physical and verbal violence, harassment, threats, and raids on their homes are among other attacks suffered by Salvadoran WHRDs. Women who defend the right to information and freedom of expression, the right to a life free from violence, and women’s rights are most under attack.

The majority of these attacks are committed by State authorities and public servants. The attackers include powerful government authorities who single out, stigmatize and target women defenders, using their public functions and even their official social media accounts. These attacks come with misogynist messages disparaging WHRDs because they are women or because they defy binary heteronormativity.

This takes place in a country plagued by violence, especially against women, with a state of emergency imposed for the past 4 months under which – as documented by human rights organizations – all kinds of arbitrary acts are committed against the people. By singling out and stigmatizing WHRDs, attacks committed by authorities and public figures have made women defenders and journalists vulnerable, with their lives and physical integrity at risk.

In this context, the work of WHRDs and journalists is essential for creating the structural and human rights conditions to end the social, economic and sexist violence that plagues the country.

Peace and democracy can only be built with respectful dialogue, respecting human rights, fighting impunity, and recognizing the contributions from diverse social and political sectors. Defending WHRDs and journalists is essential for building a lasting and dignified peace in El Salvador.