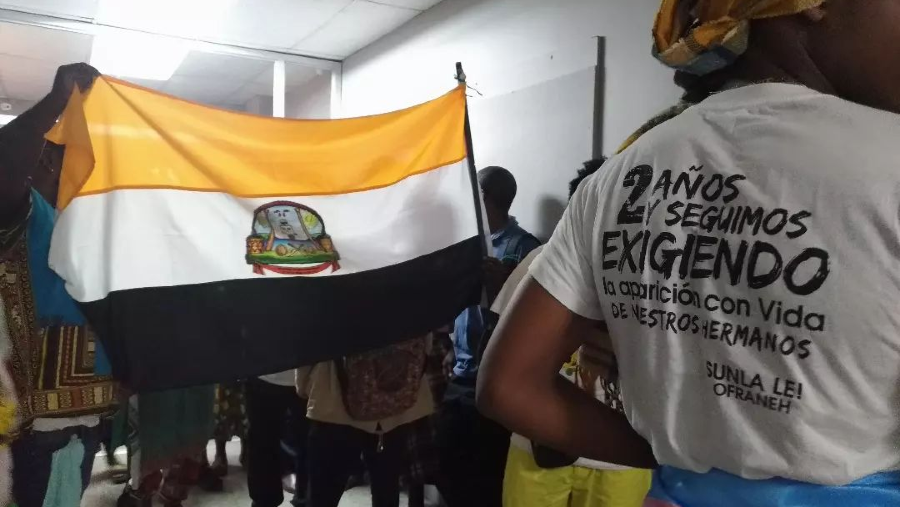 After demonstrating for the defense and recuperation of their territories and demanding the live appearance of four Garifuna youth who were forcibly disappeared more than two years ago, Miriam Miranda, Coordinator of the Black Fraternal Organization of Honduras (OFRANEH), along with human rights defenders Luther Castillo Harris and Edi Tabora, now face charges of illegal deprivation of liberty and disturbing the peace,.

On August 9, 2022, the International Day of Indigenous Peoples, the indigenous and Garifuna communities organized in OFRANEH, engaged in their legitimate right to protest by staging a peaceful takeover of the Public Prosecutor’s Office in Tegucigalpa.

As a means of protesting highly serious human rights violations against the Garifuna people, OFRANEH and representatives of other original peoples mobilized in their territories to alert the national and international community to the harshly urgent situation that they are experiencing;  to demand the presentation alive by the Honduran government of the four Garifuna youth from Triunfo de la Cruz; and to demand effective compliance with the sentences dictated by the Inter-American Court of Human Rights regarding the Punta Piedra and Triunfo de la Cruz communities.

On October 8, 2015, the Inter-American Court of Human Rights issued rulings in favor of the Garifuna communities of Triunfo de la Cruz, Tela, and Punta Piedra Bay, for the violation of their right to collective property on ancestral territory and of their right to free, prior, informed consultation. Seven years have gone by, and the government still has not complied with these rulings.

It is important to note that during the takeover of the offices by OFRANEH, none of the people’s demands and concerns were heard. After protesting in the Public Prosecutor’s Office for two hours, Miriam Miranda issued a statement on behalf of the Black Fraternal Organization of Honduras condemning official ineffectiveness, racist discrimination, and the failure of authorities to recognize the ancestral rights of autonomy and self-determination of the Garifuna people.

The territories of the Garifuna communities are continually invaded by third parties, and residents are displaced by entrepreneurs.  Invaders have plundered their natural resources, stolen their ancestral knowledge, and subjected the original inhabitants to persecution, criminalization, prosecution, imprisonment, forced disappearances, and murders.

We of IM-Defensoras and the National Network of Women Human Rights Defenders of Honduras denounce and condemn this recent aggression against Miriam Miranda and OFRANEH, as well as the situation of persecution, racism, and harassment faced by the Garifuna communities.

Likewise, we support the legitimate, ancestral demands of the Garifuna people and urge the Honduran government to restore their ancestral territories and respect their identity and autonomy.