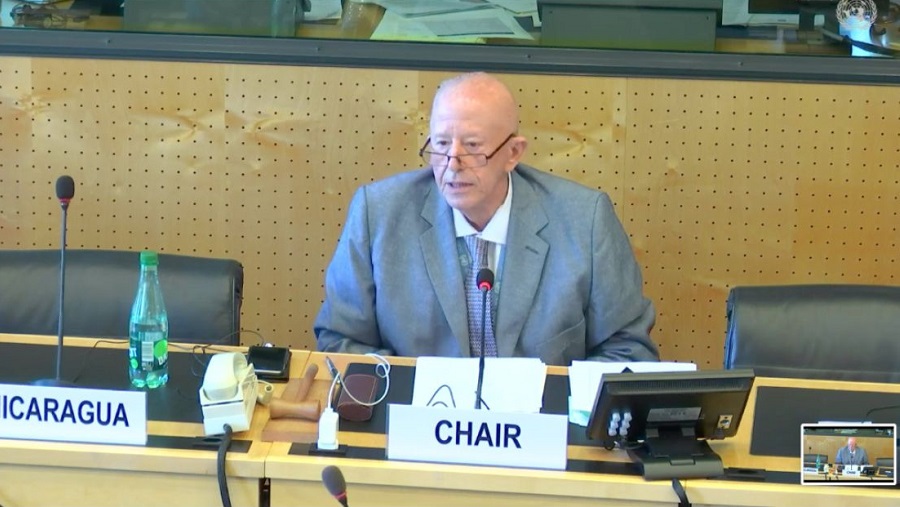 Washington D.C. / Geneva, July 18, 2022-. The Committee Against Torture (CAT) summoned the State of Nicaragua to a review under the Convention against Torture and  Other Cruel, Inhuman or Degrading Treatment or Punishment on Thursday, July 14. The Nicaraguan delegation did not attend and, through a letter, the Minister of Foreign Affairs, Denis Moncada, described the review as a “new provocation” and assured that the CAT has
“no legitimacy whatsoever to question” its reports “nor to transgress” its laws, constitution and norms.

Given the absence of State and that “Nicaragua is at a critical point in its history, which clearly affects the human rights of its population”, the Chair of the Committee, Claude Heller, informed that the group of experts would conduct the review on the basis of information provided by the Office of the United Nations High Commissioner for Human Rights (OHCHR), its annual reports, resolution 49/3 adopted by the Human Rights Council on March 31, 2022, the most recent oral update on the situation in Nicaragua (June 16, 2022), and submissions from civil
society organizations.

During the session, Heller stated that the State of Nicaragua “has systematically violated human rights” and the Convention Against Torture. “The continued failure of the State party (Nicaragua) to ensure accountability for human rights violations committed since April 2018 remains a matter of grave concern,” added Erdoğan İşcan, Committee Expert and Country Co-Rapporteur for Nicaragua.

Since April 2018, Nicaragua has been immersed in a serious socio-political and human rights crisis. The indiscriminate use of force by state and para-police groups during peaceful demonstrations has resulted in at least 355 fatalities, more than 1600 people injured and, as of May 2020, 1614 were arbitrarily detained. Following the release of several political detainees in 2019, cases of torture in state custody were documented. Currently, more than 190 people are deprived of liberty on political grounds, and there are allegations of cases of torture in state
and clandestine facilities.

According to information received by the Committee, 97% of the reported torture cases occurred in police detention centers, where arrested persons were arbitrarily deprived of their liberty without prior charge or due process of law. In addition, there is a “flagrant violation” of the United Nations Standard Minimum Rules for the Treatment of Prisoners (Nelson Mandela Rules) and the United Nations Rules for the Treatment of Women Prisoners and Non-custodial Measures for Women Offenders (Bangkok Rules) in these facilities.

The Committee reported that, although the State has stated that there is no government policy of persecuting, threatening, harassing or killing human rights defenders, or impeding the exercise of their work, “the available information demonstrates the contrary based on the set of laws (Law for the Regulation of foreign Agents, Special Law on Cybercrimes, and Law for the Defense of the Rights of the People to Independence, Sovereignty and Determination for Peace)”.

OHCHR recorded at least 40 cases of threats, intimidation, criminalization and smear campaigns, the arbitrary detention of 5 journalists, and the raid of 2 media outlets during 2021. In the same period, the Office documented 26 cases of detention and at least 4 cases of arbitrary detention of human rights defenders. “Retaliation, with the support of state groups and government sympathizers, institutionalizes violence against defenders,” said the president.

Likewise, the State of Nicaragua reported that “there are no acts of violence against NGOs” but that some of them have used their organization to “alter public order” and carry out actions to “destabilize the country” and overthrow the government, violating the General Law on Non-Profit Legal Entities (Law 147); and for this reason, the Ministry of the Interior has cancelled their legal personalities. For its part, the CAT considered that the growing trend of
cancellations “has led to a drastic reduction of civic space”.

On the other hand, regarding violence against indigenous and Afro-descendant peoples, the CAT asked the State to provide references on the investigations into the massacre of indigenous Miskitu and Mayangna people on August 23, 2021, as well as the attacks by settlers perpetrated in October of last year. The Committee expressed the reticence of the Nicaraguan authorities to provide information in this regard and their attempts to criminalize indigenous
people for these cases. It also denounce the cancellation of the legal status of the Center for Justice and Human Rights of the Atlantic Coast of Nicaragua (CEJUDHCAN), an organization of utmost importance for these peoples and communities, which have historically been forgotten by the governments in power.

Finally, the Committee urged the Nicaraguan authorities to punish those responsible for the reported abuses and to resume dialogue with the United Nations Office for Human Rights.

The Committee will issue a document with its final observations of Nicaragua on July 29, and will sent it to the State.

We, the signing civil society organizations, condemn the reaction of the Nicaraguan State’s rejection of the Committee against Torture. This is unprecedented and, as mentioned by Chairman Claude Heller, “questions the integrity of the Committee, its members and international human rights mechanisms” and expresses a profound disregard and contempt for the Convention and its working methods.

We recall that the signing and ratification of the Convention Against Torture was a voluntary action by the Nicaraguan State and that, therefore, it must comply with its international obligations in this area, specifically with the recommendations made by the Committee.

Among other issues, we demand that the State of Nicaragua: immediately cease attacks against individuals, organizations and communities that defend human rights; repeal the legal framework that allows for criminalizing organizations, journalists, social communicators and human rights defenders for their work, among other actors considered as opponents; and investigate with due diligence the attacks perpetrated against indigenous and Afro-descendant peoples, in order to prosecute and punish those responsible.

Finally, we call on the international community to respond forcefully to hold Nicaragua accountable for the human rights violations committed since April 2018. No more impunity!