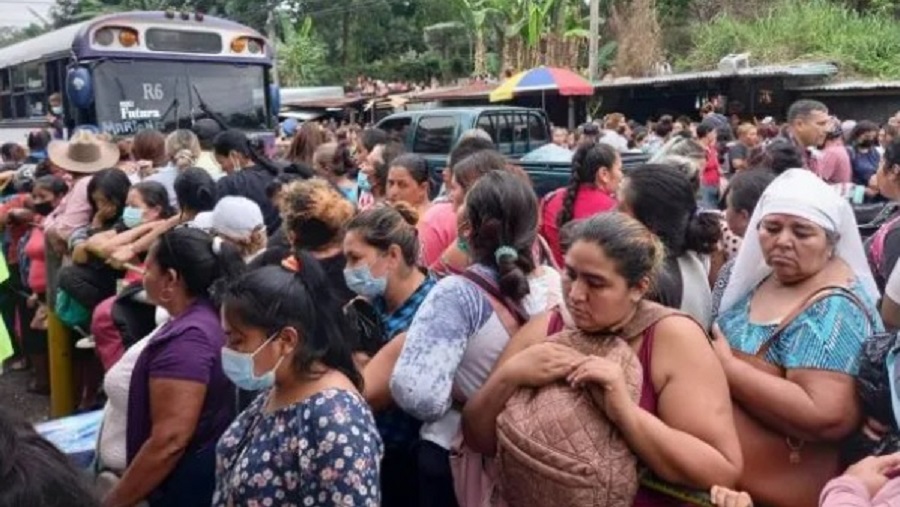 Two months after the Salvadoran regime  imposed a state of exception under the pretext of fighting a rise in gang violence, more than 30 thousand persons have been detained and deprived of their freedom in the country’s jails and prisons that were already severely overcrowded.  In many cases the imprisoned people are innocent and have been subjected to arbitrary arrest, including six women human rights defenders and community leaders.

As we have previously warned and frequently denounced, together with many other national and international human rights organizations, the suspension of guarantees in this emergency regime has been carried out according to presumptions and prejudices with no legal basis whatsoever. Some arrests have even been made because of the type of clothes people were wearing or because they had tattoos. Furthermore, these detentions have involved the abuse of people deprived of their freedom in inhuman conditions in a prison system that has long since exceeded its maximum capacity. Mistreatment also includes the denial of the right of families to receive information about the situation of their loved ones.

In view of these violations, hundreds of mothers and family members have mobilized and converged at the nation’s penitentiaries in search of information that has been systematically denied to them. In many cases, they have spent entire days outside prison gates, sleeping in the street and enduring highly precarious conditions  that pose risks to their safety and security.

All of this has taken place as part of a campaign promoted by the government, other sectors, and certain media outlets in order to criminalize and stigmatize those who denounce arbitrary measures and work for the rights of the detained people and those of their families. These defenders include members of national and international human rights organizations, journalists, attorneys, and others who have been the target of defamatory remarks. Some have been accused of having ties to gangs, “defending murderers,” or other such insults.

In this context of stigmatization, suspension of guarantees, and arbitrary measures propitiated by the regime of exception, all these defenders, independent news media, and  rights organizations, including mothers and family members of people deprived of their freedom, are exposed to an alarming risk situation, both with regards to their own personal integrity and to the exercise of their right to inform, litigate cases, pursue their own rights, and defend the rights of others.

We of IM-Defensoras and the Salvadoran Network of Women Human Rights Defenders demand an immediate end to these campaigns of public denigration and stigmatization, at the same time that we demand guarantees for persons and organizations working for human rights, independent news media, and attorneys at law to be able to carry out their work in all due conditions of safety and security without being subject to any type of coercion.

Likewise, we demand respect for the right of mothers and family members of detained persons to gain access to information on the situation of their loved ones, and guarantees for secure and humanitarian conditions as they participate in the encampments outside prison gates, seeking information to which they are rightfully entitled.

We acknowledge and respect the dignity of these mothers and family members who are struggling for their own rights and those of their loved ones, thereby becoming defenders of the human rights of all of the people of El Salvador. We wholeheartedly back their opposition to the consolidation by the Nayib Bukele government of an authoritarian security model exclusively based on punishment and not on the transformation of structural conditions that have generated and continue to deepen the serious crisis of violence that the country is experiencing.

And finally, we call on the international community to stay alert to the situation and stand in solidarity with all those people in El Salvador who never cease to work for the construction of peace based on equality, the access to decent conditions of life for all of the people, and full respect for human rights.