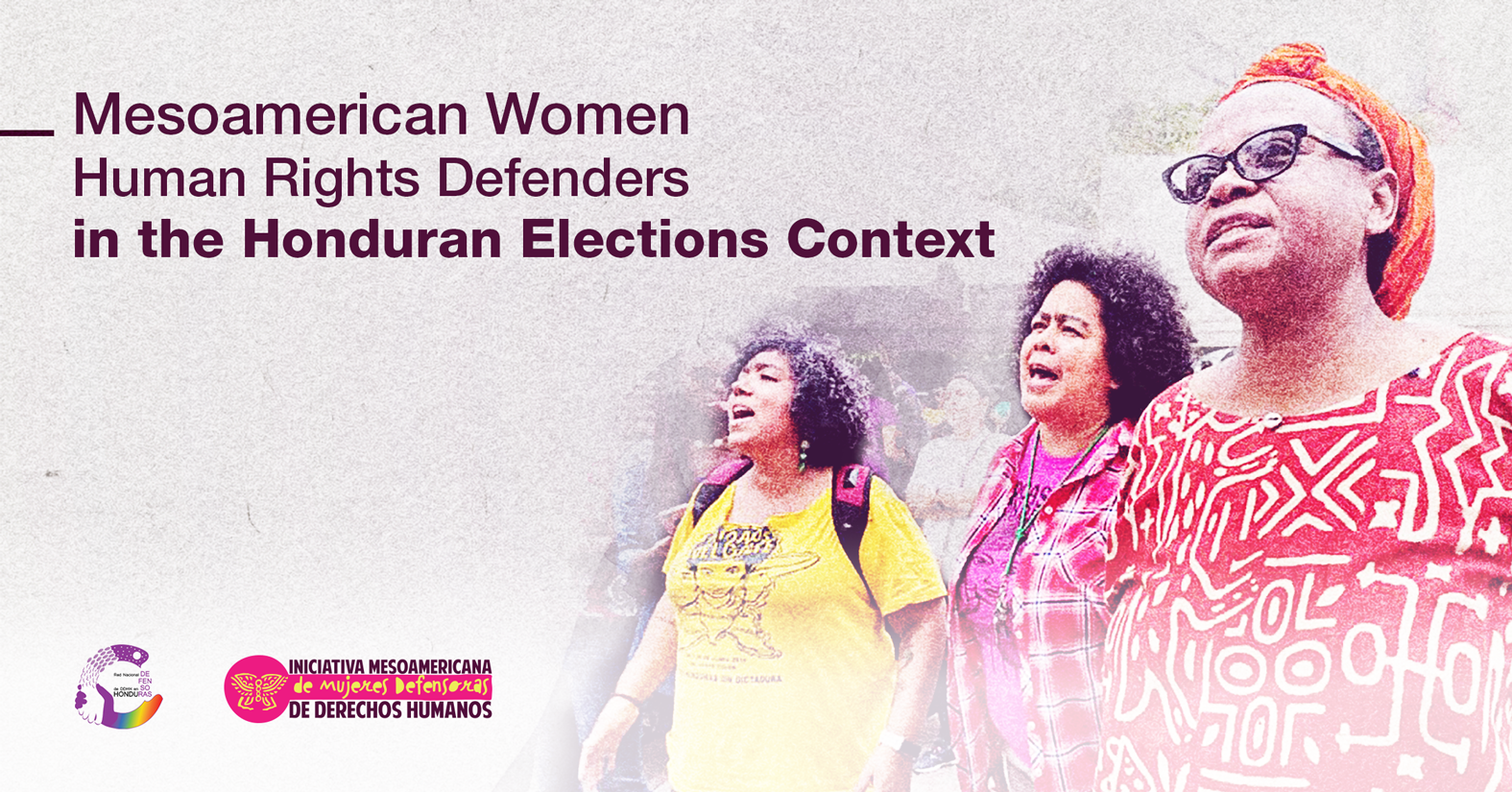 In a context of territorial dispossession, terror, and repression imposed by the narco-dictatorship that governs the country, a new election process will take place on 28 November. The National Network of Women Human Rights Defenders in Honduras and all the networks, articulations, and organizations that make up IM-Defensoras alert the peoples of Latin America and the world to the implications of this electoral context for women human rights defenders and communities in struggle, as well as its impacts on the rest of the continent.

The governing narco-dictatorship seeks to perpetuate the 2009 coup d’état that contributed to the advance of new forms of capitalist dispossession and authoritarianism in Latin America.

We are witnessing the rise and consolidation of dictatorships throughout Latin America, which – similar to the one imposed in Honduras through the 2009 coup d’état – are met with a lukewarm expression of rejection and are then quickly recognized by the international community. These dictatorships take on the democratic rhetoric and legitimize themselves through simulations of electoral processes, using laws, public resources, and the entire institutional infrastructure to benefit private interests, plunder territories, and repress the population with total impunity.

In Honduras, this international recognition was recently confirmed with the admission of the Honduran State to the UN Human Rights Council, thus legitimizing an authoritarian government with proven links to drug trafficking. This is a government that systematically represses social protest, as seen during the 2017 elections, with 23 killings and 25 proven cases of torture that were documented and remain unpunished.[1]

The current narco-dictatorship in Honduras uses State power to protect private interests and plunder the public coffers while subjecting 70% of its population to poverty[2] and abandoning them to fend for themselves in the midst of a global pandemic.[3] It also uses State power to restrict and violate the right to defend rights, as demonstrated by the most recent penal code reform,[4] systematically flouting its national and international human rights obligations and failing to comply with all recommendations, resolutions, and judgments issued by international mechanisms and tribunals, such as the Inter-American Court’s sentence in favor of the Triunfo de la Cruz and Punta Piedra communities.

Moreover, it is a misogynist narco-dictatorship that allows a woman to be murdered every 29 hours in the country[5], and that fully criminalizes the termination of pregnancy, even if it puts women’s lives at risk.

Behind the 2009 coup d’état and its consolidation through successive electoral frauds lie the interests of extractive capitalism which, in order to impose itself, has made Honduras one of the most dangerous countries in the world to defend human rights, particularly for those who defend territories from plundering and environmental devastation.[6]

In Honduras, women defenders of territory and their communities have been killed, threatened, defamed with misogyny, sexually assaulted, and criminalized with absolute impunity. Their homes have been raided, their sons and daughters have suffered threats, attacks, and forced disappearances. Since our sister Berta Cáceres was executed in cold blood by a power structure that includes the military, government agencies, hired assassins, and companies supported by international funds, 8 women defenders of the territory have been killed, 35 have suffered assassination attempts, and they have faced at least 1,088 attacks.[7]

The Garifuna peoples organized in the Honduran Black Fraternal Organization (OFRANEH) – internationally recognized for the construction of alternatives for a dignified life and protection of the environment based on their ancestral wisdom – have been suffering harassment, killings, and illegal detentions for decades. Since 2020, they have denounced the forced disappearance of four young people from the community of Triunfo de la Cruz; the Inter-American Court has issued a sentence on this case, with which the government has refused to comply.

This continuous and relentless violence is explained by the accelerated process of privatization, looting, and dispossession of territories that has reached its maximum expression through the Zones for Employment and Economic Development (ZEDE for its acronym in Spanish). This misnamed initiative is an attempt – without precedent in the continent – to legalize the illegitimate appropriation of territories and their resources, subjecting communities to the control and absolute power of companies and the rulers who protect them. ZEDEs are subject to a “special regime”[8] and have the power to create their own tax system, their own police, and to force people living in their demarcation to sign “coexistence agreements”.[9] For this reason, through assemblies or open town halls, communities are increasingly declaring themselves ZEDE-free areas.[10]

Given this situation, we must express our worry about our sister defenders in Honduras, their lack of protection, and the vulnerability of all the processes of struggle and resistance that remain active and organized in cities, towns, and communities around the country, fighting against dispossession and injustice.

We therefore make a strong appeal to the international community to stop sanctioning the Honduran State’s practices that violate human rights. By prioritizing their sordid economic and geopolitical interests over people’s lives and voting to allow Honduras’ entry into the Human Rights Council, they are supporting a narco-dictatorship that scorns the lives and rights of the people, with particular viciousness towards women and indigenous peoples.

We call on the people of the world to raise your voices for the Honduran people, to amplify the voices of women human rights defenders and their communities, and to see in this territory the brutal reflection of the policies and interests that are being imposed around the world.

We also call for the recognition, appreciation, and gratitude for the example of resistance, defense of life, and construction of a just and egalitarian world that the women defenders, the communities and the people of Honduras are carrying out, whose strength and inspiration are so necessary for us to survive as humanity.

[1]   Accountability for human rights violations committed in the context of the 2017 elections in Honduras: Progress and challenges Available at: https://oacnudh.hn/informes-tematicos/

[3]   So far, 8,373 deaths due to COVID-19 have been reported and only 5.5% of the population has been vaccinated, while 45% of the country’s households have reported income losses. Source: National Network of Women Human Rights Defenders in Honduras. Context Analysis. September 2021.

[6]   OHCHR. End of mission statement by Michel Forst, United Nations Special Rapporteur on the situation of human rights defenders on his visit to Honduras, 29 April to 12 May.