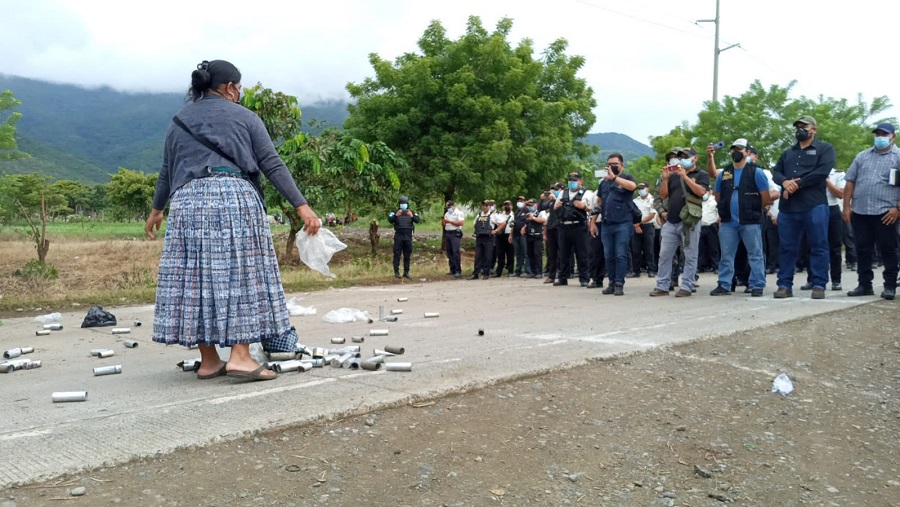 On Sunday October 24th, after two days of brutal repression by the National Civilian Police (PNC, Spanish initials) and Army against the Q’eqchi’ people peacefully opposing the illegal operation of the Swiss–Russian Solway Mining Company, the Guatemalan government decreed a state of siege in the town of El Estor, Izabal. That same Sunday, the police forcibly entered and searched the Q’eqchi’ Ombudsman’s Office and the Xyaab’ Tzuultaq’a Community Radio, thereby censoring and violating the right to information from unofficial news media.

This latest government offensive against the Q’eqchi’ people in El Estor began last Friday, October 22nd, when the PNC and Army used teargas in their violent repression of people organized in dozens of Q’eqchi communities.  For twenty days, these communities had held a peaceful protest at the entrance to the town to hinder the passage of trucks laden with coal that the mine needs in order to operate. In this way, the demonstrators were demanding compliance with a resolution of the Constitutional Court that orders the suspension of the mining operation and with another by the same Court that includes pre-consultation activities.

The repression took place during Saturday and Sunday, October 23rd and 24th,  with the aforementioned search of the Q’eqchi’ Ombudsman’s Office and the Xyaab’ Tzuultaq’a Community Radio,  and the imposition of a 30-day state of siege, when the right to protest was limited and when security forces were able to make arrests without a court order.

Furthermore, this police and military repression has occurred along with diverse attacks and infringements of the right of alternative and community news media to inform. These news media have been threatened and intimidated in a number of different ways for endeavoring to offer a version of the facts that differs from the official version, which seeks to criminalize the  Q’eqchi’ population and hold it responsible for a situation of violence that is the exclusive responsibility of the State. Upon allowing the illegal mining operation to continue, and repressing the protesters who are peacefully opposing this illegality, the Guatemalan government has become an accomplice of the perpetrators.

We of IM-Defensoras demand an immediate end to State violence in El Estor, the suspension of the state of siege, and an immediate end to the illegal operation of the mine exploited by the Solway Company. We hold the Guatemalan government responsible for any violation whatsoever of the life and integrity of the members of the Q’eqchi’ people who are firm in their resistance and in their demands for compliance with the resolution of the Constitutional Court. Likewise, we demand respect for the right to inform by all persons working in community and alternative news media.

We send a warm embrace our defender comrades, as we support and acknowledge the labor and force of the members of the Maya Q’eqchi’ Ancestral Council, who remain on the front lines of resistance as they risk their bodies and their lives to defend the water and protect Lake Izabal and the web of life from the mining industry with State complicity.

We call on the international community to stand in solidarity with these comrades and their communities by denouncing the situation, joining in their demands, and staying alert to the latest developments.