[Urgent Alert] AFGHANISTAN / In light of the Taliban offensive and humanitarian crisis brought on by NATO, it is crucial to support Afghan women activists and their organizations in order to guarantee their security and ongoing struggle for the rights of women and girls. 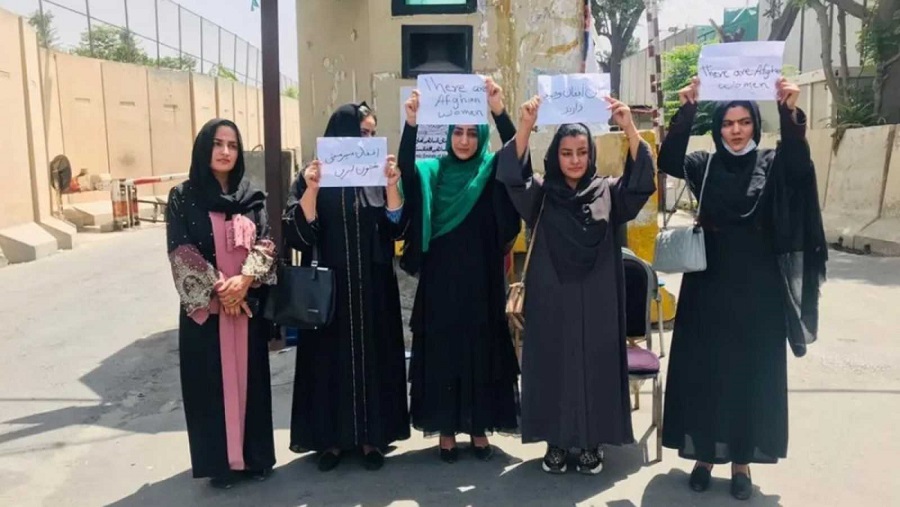 Afghan women defenders and activists, along with women, girls, and dissident persons of diverse sexual orientations and gender identities are in an extremely high risk situation since the assumption of power by the Taliban, or the self-designated Islamic Emirate of Afghanistan. This is happening upon the withdrawal of the United States and its allies in the North Atlantic Treaty Organization (NATO) twenty years after they unilaterally initiated a highly destructive war.

Women and girls are still paying the price for a decades-long failed international military policy with the United States leading the way. Far from striving for the rights of women and girls, the U.S. pursued its own economic interests and quest for geo-political control and went so far as to train and finance armed groups in Afghanistan that have committed many atrocities, including unspeakable violence against women. In its efforts to defeat the Taliban, the United States formed alliances with warlords, many of whom rose to prominent government positions and continued to violate rights with total impunity. The United States and allied NATO governments spent far more money on military intervention than on efforts to further women’s rights. (1)

The current ascent to power by the Taliban involves a rise in the imposition and continuity of misogynous, fundamentalist policies that radically violate the human rights of women, girls and dissident persons with diverse sexual orientations and generic identities. It puts activists and women human rights defenders in an extremely high-risk situation, including the risk of being pursued, disappeared, and even executed. Reports in the news media now disclose attacks against women and girls in areas recently captured by the Taliban. Schools for girls have been bombed or closed. The violent attacks perpetrated by the Taliban against women and girls are war crimes that include summary executions, sexual violence and forced marriages. These acts of violence are fostering massive displacement, which, in the context of a worldwide pandemic, escalates a drastic humanitarian crisis.

During the last two decades, thousands of women have risked their lives to promote the rights of women and girls in Afghanistan. They, and not interventionist foreign powers, are the ones who have collectively risked their bodies and integrity in their communities and territories and have made important strides in obtaining their rights, which are now in danger of being rolled back.

We of IM-Defensoras repudiate the misogynist, fundamentalist policies of the Taliban regime and accuse the United States and its NATO allies of sharing responsibility in the current humanitarian and human rights crisis now experienced by the Afghan people, a crisis that especially affects women and girls.

In this situation, it is urgent to take firm, rapid steps to protect Afghan women human rights defenders and their organizations. And so we call on defenders and organizations throughout the world to make a commitment to the protection of Afghan women and their organizations by supporting their calls for solidarity,  disseminating their view of the conflict, supporting their causes through fund-raising initiatives such as the Afghan Women’s Survival Fund, and demanding that the governments of our countries commit to winning peace and the protection of women in Afghanistan.

We demand that the international governments and actors assume their responsibility for this tragedy and that, in opposition to the mindset of war that has prevailed until now, adopt all necessary measures to ensure a lasting peace, an effort in which the women and human rights defenders in Afghanistan must be the main protagonists.

We also demand the facilitation of international shelter for Afghan women and activists at risk. This entails reversing increasingly inhumane border imposition policies throughout the world and establishing a humanitarian corridor to streamline the delivery of assistance under the guidance and leadership of local women’s organizations.

Our recognition and admiration goes out to the Afghan women defenders who, despite facing conditions of extreme hostility for decades, have worked tirelessly for the rights of women and girls in the country. They are an inspiration for us, and now more than ever, our hearts and minds are with them as we send them all a sisterly embrace.

(1) MADRE: The Taliban Takes Power, After 20 Years of a Failed US War.