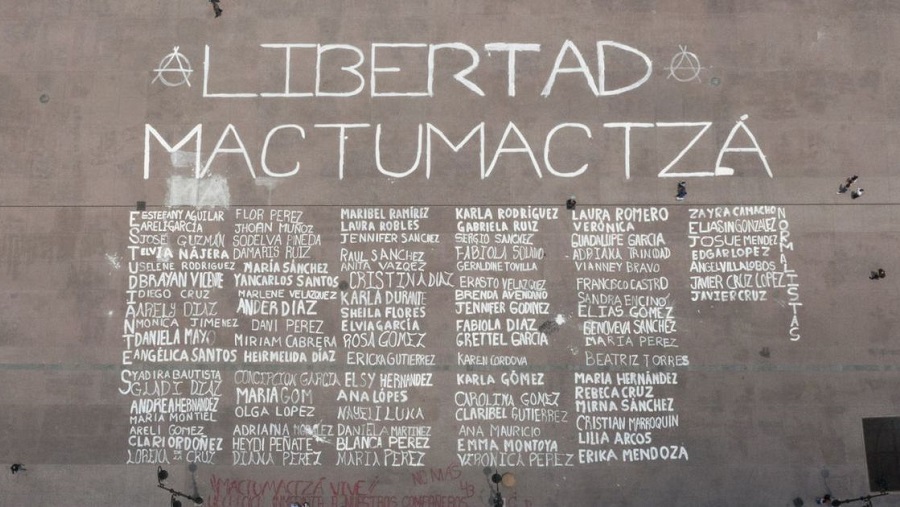 Activity
Defense of the right to education without discrimination

On Tuesday, May 18th, the Chiapas state police violently repressed approximately 250 students at the Mactumactzá Rural Teacher Training School. They had been protesting in Tuxtla Gutiérrez, Chiapas, with demands of conditions of access to education with equality and non-discrimination. During the forced eviction, 95 persons were arbitrarily arrested and later transferred to confinement centers. These included 74 young women, mainly indigenous, of the Tsotsil, Tseltal and Chol peoples. Several of the women arrested denounced the fact that they were subjected to different forms of aggression during their arrest, primarily sexual abuse and assault such as groping.

The 74 students were held until Sunday, May 23rd, the date on which the judge declared their freedom. All continue to face charges of property damage, robbery with violence, gang membership, riot, attempts against peace and the corporate functions of the patrimonial State. These are the same offenses attributed to the 19 young persons who continue to be deprived of their freedom as they wait for their situation to be clarified in the hearing scheduled for this Tuesday, May 25th. It is important to explain that two of them belong to the movement of displaced persons from the Puebla community in Chenahó, who have been granted precautionary measures by the Inter-American Center for Human Rights (IACHR).

The rural teacher training schools such as the one known as “Mactumactzá” are, for many students from rural indigenous communities, one of the few ways to continue with their education. Historically, these schools they have played a significant role in reversing inequality, exclusion and structural discrimination experienced by rural indigenous communities and peoples in Mexico. The teachers who have graduated from the rural teacher training schools play a crucial role in guaranteeing access to education with respect for idiosyncrasies, world views, languages and self-determination.

Moreover, the teacher training schools are vital for making progress in gender equality, given the significant participation of young women. While the national education system maintains a racist, classist, patriarchal bias that excludes them, these educational centers allow women to participate and become proponents of the right to education in their own communities. The schools have also played an active role in the struggles for social justice among their peoples and in the dissemination of human rights.  Due to this transformative role played in some of the most impoverished territories in the country, people who study in the teacher training schools have historically been attacked and criminalized and their schools abandoned and undermined by current governments and other power groups.

Accordingly, the motive of the protest last May 18th was to demand that the entrance exam to the school would be in person, observing the bio-sanitary measures decreed during the COVID- 19 pandemic, given that the majority of the students come from rural indigenous communities without Internet access, and so the digital gap means conditions of exclusion and structural discrimination for all of them.

The brutal, incommensurate police response and that of the system of justice to these legitimate protests, including sexual aggression perpetrated against the women students, is one more proof of the racist, classist, patriarchal nature of the State and its policies of death.

We of IM-Defensoras and the National Network of Women Human Rights Defenders recognize the dignity, legitimacy, and importance of the struggle of the student comrades of the Mactumactzá Rural Teacher Training School. By asserting their right to access to education, they are defending the right of the most violently abused, excluded and discriminated people to resist policies of death and to continue to build their own forms of resistance and life alternatives.

We condemn the actions of the government of Chiapas and demand an end to the criminalization of the 74 teacher training students, immediate freedom, and the dismissal of all charges against the 19 young people who are still deprived of their freedom, 17 of whom are students and 2 of who are displaced people from the Puebla community in Chenahó.

We call on the international community to stand in solidarity with the student movement of the Mactumactzá Rural Teacher Training School and to wholeheartedly support their educational demands, their demand for freedom, and an end to their criminalization.