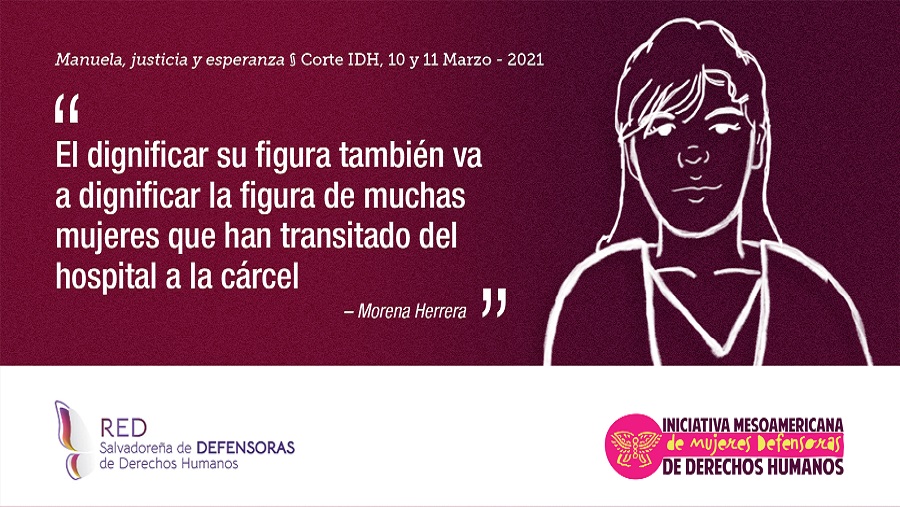 Last March 10th and 11th, the InterAmerican Court of Human Rights held a public hearing on the case of Manuela, a Salvadoran woman who died in prison after being criminalized and sentenced to 30 years for suffering an obstetric emergency. In this context, anti-rights groups and persons intensified their campaign of stigmatization, delegitimization, and hate speech that they have carried out against women defenders and organizations litigating or accompanying the case and, in general, against everyone defending the rights of women and sexual and reproductive rights in El Salvador.

A few days before the hearing began, on March 3 and 4, 2021, the anti-rights organization  “Fundación Vida SV” published diverse messages in social networks that perpetuate the stigmatization, re-victimization, and criminalization of Manuela. They even went so far as to personify the fetus that she lost and publish images of her autopsy, little by little undermining the image of Manuela and those who litigate and accompany her case. They also contribute to the stigmatization of young women in a situation of poverty who face criminalization processes for obstetric emergencies due to the absolute penalization of abortion and the  situation of criminalization that exists in the country.

Especially serious and alarming is the fact that persons associated with this foundation even included in their publications a photograph in which the victim in this case appears with her real name, despite the fact that her identity has been deemed confidential in order to safeguard the integrity of her family. Attacks related to this case even continued while the hearing was held, with derogatory messages disseminated through the chat of the associated platform.

These and other forms of aggression related to this case are nothing new. On April 29, 2020, the day before the virtual forum entitled “10 Years without Manuela,”  the Citizens’ Group for the Decriminalization of Abortion in El Salvador, a representative in the case, suffered more than  3,000 sabotage attempts on their Web page. In October of 2020, the Salvadoran Network of Women Defenders denounced the fact that in the context of the celebration of September 28th, the International Safe Abortion Day, anti-rights groups activated their campaign entitled “40 days for Life”,  devoted to providing false information, carrying out smear campaigns against the work of women  human rights defenders in the county, and committing acts of harassment and surveillance, like those perpetrated against “La Casa de Todas,” a space used by many different organizations of women human rights defenders.

These campaigns of stigmatization, harassment and attacks date back to 2014, coinciding with the launching of the Freedom for the 17 Campaign, which, thanks to the efforts of organizations such as the Feminist Collective and the Citizen Group for the Decriminalization contributed to lending high international visibility to the situation faced by women in El Salvador. Here, abortion is totally criminalized and there are women who have been sentenced to 40 years in prison for obstetric emergencies, as in the case of Manuela.

We of IM-Defensoras and the Salvadoran Network of Women Human Rights Defenders extend our solidarity and acknowledge the critical work carried out by women defenders and organizations supporting the Manuela case. This sets an important precedent for all sexual and reproductive rights defenders in the region.

We repudiate these attacks and denounce the campaign of stigmatization, hate speech, and criminalization that these comrades face. We demand an immediate end to this and call on all responsible authorities to adopt timely measures for ending misogynous, anti-rights hate speech and ensuring that it will no longer go unpunished in the country. El Salvador has one of the highest rates of violence against women in the region, with a  rate of 3.3 femicides for every 100,000 women, and last year alone denouncements related to violence against women increased by 70%. At the Dra. María Isabel Rodríguez National Hospital for Women, only in the months from January to June, 2020, there were 258 cases involving pregnancies of girls from 10 to 14 years old.