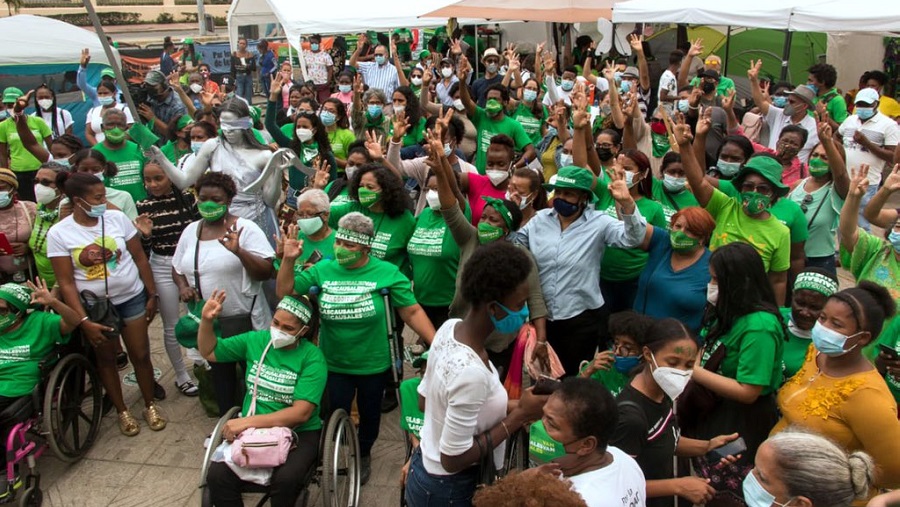 In the early morning hours of April 20th in the Dominican Republic after the First National Assembly was held, women defenders of sexual and reproductive rights of the “Three Grounds Movement” were brutally dislodged by agents of the National Police.

The actions took place on their encampment set up outside the National Palace, where security forces destroyed property, dismantled tents and fired tear gas grenades, placing the life, health and integrity of our comrades at risk.

The Three Grounds Movement, which struggles for the decriminalization of pregnancy termination for three basic reasons has been the target of consecutive attacks and criminal acts for more than 40 days of legitimate protest.

On April 18th, 12 people had to be taken to medical centers after eating dessert that was given to them with an inscription in the name of “María Teresa Alcántara”. Most of them were discharged and are now in a good state of health, but two comrades have not been released.

Systematic aggression against these sisters has taken place in social networks and news media where offenders have fostered an ongoing campaign of disinformation and stigmatization.

This attempt on the lives of the comrades sets a dangerous precedent in the region and in the struggle for the freedom and right to make decisions about our bodies.

A struggle for life

We of IM-Defensoras hereby express our solidarity with the demands and feminist resistance of our Dominican sisters. We repudiate any action whatsoever that threatens the life and integrity of the comrades in the Grounds Movement and demand an end to the persecution, attacks, and acts of intimidation and violence by the National Police or any other perpetrator.

Defending rights must not pose a risk to our lives. The struggle of our Dominican comrades is a struggle for the lives of all girls, adolescents, and women in Latin America and the Caribbean. The three grounds have to do with guaranteeing the most basic rights to life, health, integrity and autonomy of women.  Violence against our comrades is inadmissible.

From Mesoamerica we are staying on the alert and keeping up resistance. We are with you, sisters.