We demand a March 8th free from repression and patriarchal violence! 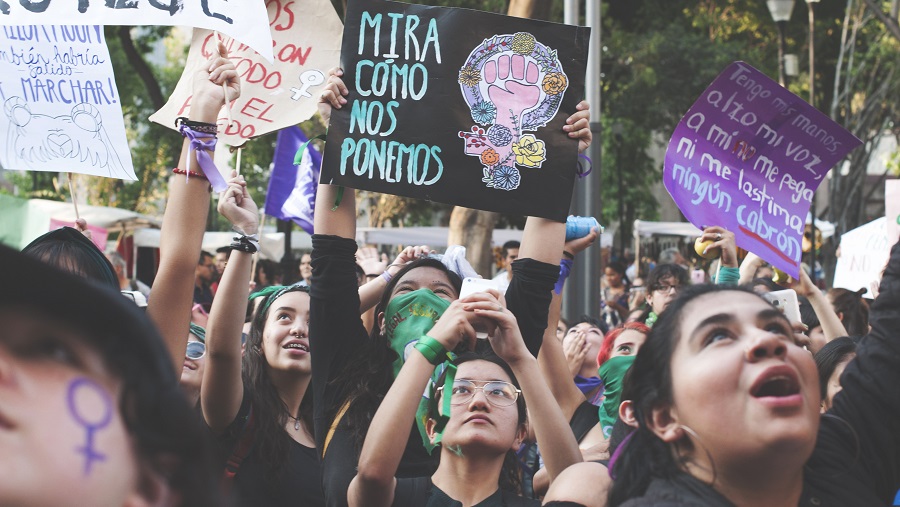 For several decades on March 8th, millions of women and feminists around the world have confirmed the strength of our voices joined together. We have mobilized in plazas and other public spaces to assert our determination to transform a world in crisis that imposes patriarchal, racist, capitalist and colonial violence and exploitation on our bodies and territories.

March 8th is a moment to feel close together and to be together, to construct a single cry of rage and hope, and to do this based on our diversity.  On March 8th  we acknowledge each other as we honor our ancestors and our comrades who are now defending the rights of all women.

The massive mobilizations of recent years have made us more visible than ever and have made it possible for many other women, whether timidly or openly, to take up our call for freedom, justice and equality.  This powerful stance is a tremendous threat to those who want to keep us submissive, alone, and indoors. That’s why the marches led by women and feminists on March 8th and other emblematic dates strike so much fear and rage in the hearts of the keepers of the patriarchal order, for whom violence is the only possible response.

We of IM-Defensoras and the national networks and groups of women defenders to which we belong have confirmed a rise in violence and repression every time we demonstrate. This marks a regional tendency aimed at silencing voices and limiting our presence in public spaces for protest. Some of the patterns we have identified are as follows:

Limits on our protest spaces and militarization of marches.  In recent years, for an increasing number of feminists in Mexico, Guatemala, Honduras and El Salvador, the right to freely demonstrate has been restricted by police forces that establish the limits of movements with the pretext of “taking care of” the participants in the marches. The “protectors” are frequently other women who preside over restrictive boundaries as a strategy to render patriarchal violence invisible.

In Nicaragua since 2019, all demonstrations and protests have been prohibited, and any of our comrades who try to come together to protest are surrounded by police or paramilitary forces. It is common for this harassment to continue in their homes and for it to extend to their families. In Honduras, protests are systematically repressed with tear gas and other forms of police violence.

Public exposure and attacks on our bodies. Beatings, pushing and shoving, groping and other forms of sexual violence are some of the experiences shared by comrades who have been attacked during protests in all of our countries. Indigenous and territorial defenders, along with transgender, lesbian, and young activists in the entire region, are those who have most often faced the custodians of this racist, macho, classist and adult-oriented system that is made uncomfortable by our voices.

To these attacks, we hasten to add different forms of intimidation, such as following participants in marches, photographing them, recording them in videos, and disseminating the tapes and photos in social networks.

For women journalists and communicators, these attacks also include the robbery or destruction of their tools of work, such as telephones and cameras, which frequently end up as part of the spoils of their assailants.

Institutional hate speech. There has been an escalation of systematic attacks against feminists and their organizations. Terms such as “feminazis”, “gangbangers”, “abortionists” “terrorists” and “vandáls” are often used in official speech to generate hatred against us, and are disseminated through the State apparatus and social networks. Digital territory has become another battlefield in which feminists and women leaders are named, harassed and attacked. In the year 2020 alone, such attacks rose drastically, above all in countries such as El Salvador. These hate campaigns make an impact on our support networks, communities, organizations and families, and have even led to attacks by the armed forces as well as unknown persons and those close to us.

The criminalization of struggles and protests. In all of our countries we have documented criminalization processes against comrades whose only crime was demonstrating or raising their voices; this is part of a State strategy to demobilize us and introduce fear in our ranks in order to keep us out of the streets. One example of this is the proceedings by the Public Procecutor’s Office against feminists in Mexico who participated in the March 8th mobilizations in 2020. Another is the arbitrary arrest of comrades in Bajo Aguán and Guapinol in Honduras, and yet another is the unjust arrest of young women defenders in Nicaragua and Guatemala for the simple act of demonstrating.

The pandemic at the service of repression. The COVID-19 pandemic has served as an instrument for imposing totalitarian measures that limit our protests and our right to inform and be informed. The imposition of curfews and practices of obligatory isolation have been used as excuses to attack criminalize, and assassinate us.

For all of these reasons, this March 8th, like all the days of the year, we women demand to live lives free from violence and to be able to express ourselves, come together, and demonstrate without fear.

We demand that our governments recognize and take responsibility for the grave situation of violence and inequality faced by women, and that government officials refrain from any act whatsoever of defamation or violence against us.

This March 8th, we will be vigilant regarding the actions of the authorities and other actors who intend to silence our voices, and we will denounce any act of violence and repression against us. But above all, we will continue to care for each other, defending life together, and building a world of dignity and rights that we deserve.