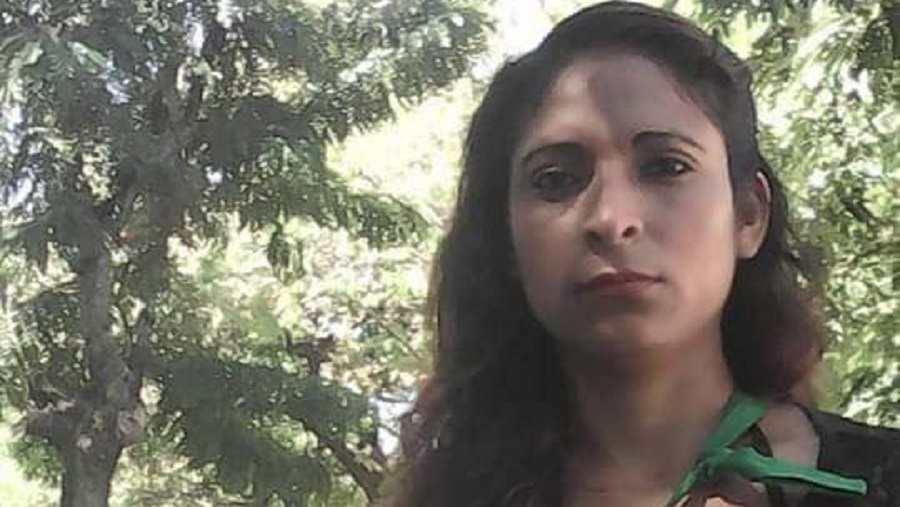 THE FACTS – The activist and political prisoner Julia Hernandez has been condemned by Judge Irma Oralia Laguna to a sentence of 18 years in prison and a fine of more than 50,000 córdobas (approximately $1,400 USD) on fabricated charges related to drug trafficking and the possession of arms of restricted use.

Julia was criminalized and imprisoned on January 7, 2021. That day anti-riot police with dogs  illegally broke into her home in Masaya, allegedly looking for drugs and arms. Despite having found no evidence of any crime, the police arrested her husband, Eduardo José Morales Gadea, and confiscated the cell phones and identification papers of both. They then forced Julia to go with them to a family property under construction, also located in Masaya, where they engaged in illegal search and seizure without finding anything at all according to the testimonies of neighbors. Julia was disappeared through concealment of her whereabouts for approximately 15 days.  After that, she was not able to return to her home and was not allowed to call her family until January 22nd. She was transferred to the Women’s Penitentiary, EPIM, known as “La Esperanza” (Hope) and accused along with her husband of the commission of the alleged offenses of “the sale of narcotic drugs or psychotropic or other controlled substances and the manufacture, sale, possession or use of restricted arms and explosive substances or devices.”

Since the outbreak of the socio-political and human rights crisis that the country has experienced since April of 2018, Julia Hernández has played an active role in anti-government protests in Masaya. As a result, in November of 2019, she was illegally detained for nine days despite having no charges filed against her.

The arrest, prosecution, and sentencing of Julia Hernández has been plagued with irregularities, so much so that in March, the trial had to be suspended for lack of evidence presented by the Public Prosecutor. The violations of due process of law in Julia’s case are consistent with the pattern of criminalization of social protest, similar to violations against other political prisoners in Nicaragua, who have been indicted on fabricated charges related to drug trafficking and the use of arms. Through the imposition of long sentences, the State seeks to make an example out of them in order to spread fear among the general public and discourage anti-government protests.  That was true, for example, in the case of another political prisoner, María Esperanza Sánchez.

Likewise, it is important to point out that Julia suffers from diabetes and has family members who depend on her: a nine-year-old son and her mother, who is an older adult with disabilities. The criminalization of Julia and her husband and the attacks against them have had a heavy impact on the family, especially on her mother and her son. They are in a vulnerable situation, both economically and with regards to their psycho-emotional health, having been affected by the social stigma of the false charges against Julia and her husband.

We of  IM-Defensoras hereby denounce the absolutely arbitrary and unjust  criminalization and sentencing of Julia Hernández, preceded by her illegal arrest and violation of procedural safeguards, and we hold the Nicaraguan government responsible for any infringement whatsoever of her physical and psychological integrity.

Julia Hernández has committed no crime and should be released and returned to her home immediately. We call on the international community to express solidarity with her and to stay abreast of the situation, joining in the demand for her release and that of the other political prisoners who are still being illegally deprived of their  freedom in  Nicaragua.