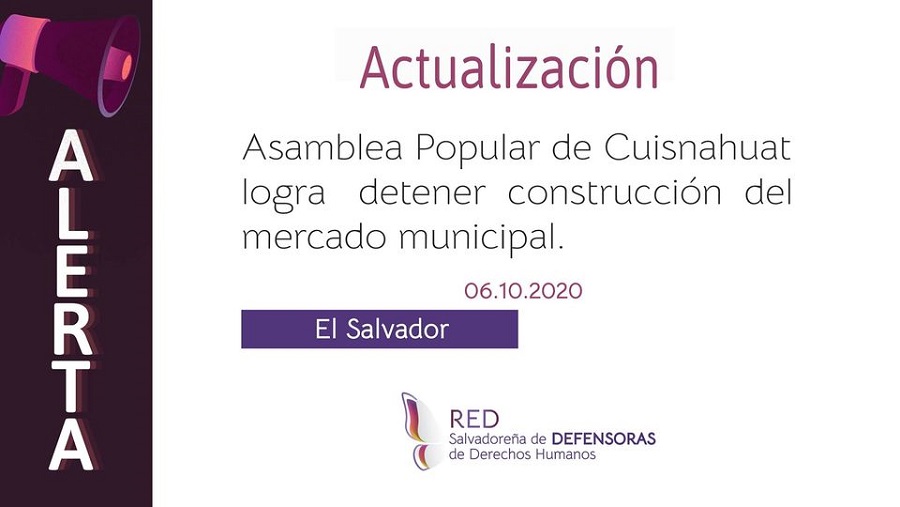 Salvadoran Network of Women Human Rights Defenders – Since July 29th of this year, the People’s Assembly of  Cuisnahuat has been engaged in a peaceful action to safeguard the town park after a decision was made by Mayor Gustavo Ernesto Sierra Pérez to disregard the opinion of the community which, ever since 2019 had presented proposals for a terrain for the construction of a municipal market, making clear its posture: #NotInThePark.

Despite all this, and claiming to have all the necessary requisites, the Mayor’s Office of  Cuisnahuat had begun construction that entailed cutting down trees and damage to the park, impairment of a septic tank and thus, the further impairment of municipal health.

For these reasons, the People’s Assembly of Cuisnahuat denounced these acts in the Western Environmental Tribunal. Accordingly, the Santa Ana Licda Environmental Judge, Norma Elizabeth Lemus de Milla, performed the respective inspection yesterday in the municipality of Cuisnahuat and issued an order to HALT CONSTRUCTION, setting a deadline of 20 days for the municipal government to clean up the waste left by the destruction of the septic tank.

We celebrate the measures dictated by the judge and, above all, recognize that environmental justice is possible when communities organize themselves to defend their rights.

The people are content. But the final verdict regarding the inspection remains to be seen, and so we continue to be vigilant for the judge’s findings, and hope that Mayor Gustavo Sierra will be brought to justice for the damage he has done to the town and to public health.