[WHRD Alert SV] Violation of workers’ rights and obstruction of defense of rights of women of Florenzi Trade Union. 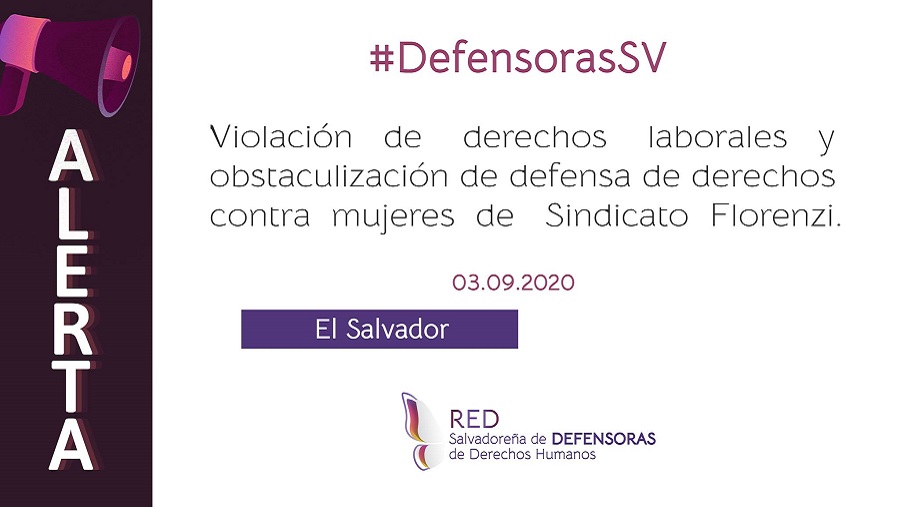 Salvadoran Network of Women Human Rights Defenders – On September 3rd, women of the Florenzi Trade Union appeared in the Legislative Assembly to request a hearing before the Labor Commission.

The Florenzi textile factory stopped work as of March 19 after the mandatory quarantine was declared due to the COVID-19 national health emergency; since then the factory workers have not received wages or benefits.

On July 1, the company’s legal representative informed 200 workers, 193 women and 16 men, that they were being fired, without the cancelation of the corresponding compensation and benefits.

On July 8, 113 of the affected workers filed lawsuits to demand compensation and statutory benefits, but to date they have not received a response in this judicial process.

Rights defenders have been keeping watch outside the factory for 52 days, demanding labor rights. Yesterday, September 3, members of the National Civil Police and the Attorney General’s Office appeared with the intention of evicting the defenders.

We of the Salvadoran Network of Women Human Rights Defenders stand in solidarity with the workers’ rights defenders and their families, who have been affected by the layoffs as well as the pandemic that furthers the instability of their lives.

We demand that the Secretary of Labor Rolando Castro take action regarding this clear violation of workers’ rights and that he rule in favor of the women defenders and their families.

We call on the National Civil Police and the Attorney General’s Office to cease their obstruction of the legitimate defense by the trade unionists of their workers’ rights.  And we further call on the Salvadoran Institute for Women’s Development and the Office of the Ombudsman for Human Rights to guarantee that the women defenders can pursue their work in defense of workers’ rights and human rights without reprisals or other negative repercussions.