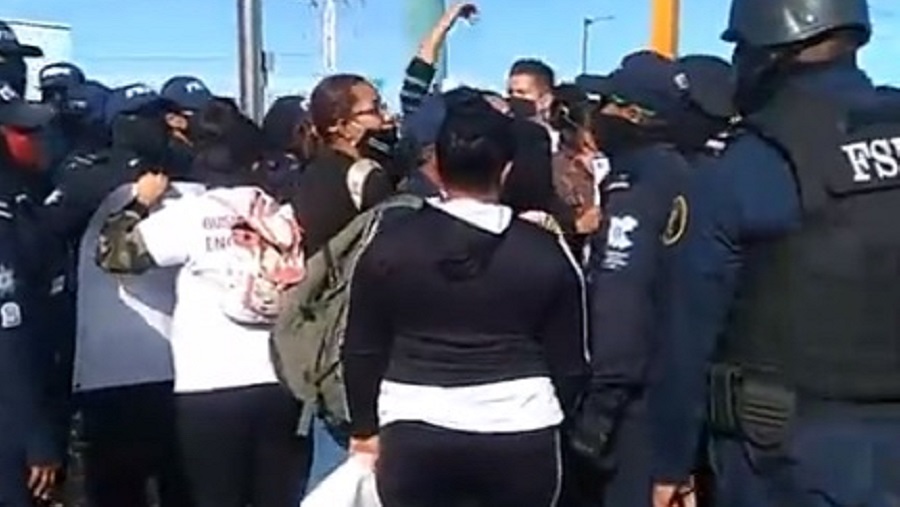 Among those arrested were defenders Isela Berenice Olimpia Montoya Juárez, Karla Verónica Martínez Jiménez and Verónica Durán Lara, whose family members have been forcibly disappeared, along with Sandra Cervantes. All were released after being presented before the Public Prosecutor. As of August 3, 2020, the investigation files of the first three arrested women are still open, a continuation of the criminalization process against them.

These acts took place the day after the families of disappeared persons had planned to set up an encampment to express their disagreement with the appointment of the new head of the government’s Search Commission. It is important to note that the fifth person arrested was Jorge Francisco Rubio Salgado, Deputy Visitor of the Coordination of Disappeared Persons Program of the First Investigative Unit of the National Human Rights Commission.

Formerly, family members of the “A tu encuentro” Collective and members of the Sowing Community Organization had reported that on June 18, after a demonstration outside the State Attorney General’s Office, armed individuals were taking their pictures; nevertheless, the official of the Office not only ignored the complaint, but also urged family members to stop searching for disappeared persons. Another precedent had occurred on February 18, when upon returning from a meeting in León Guanajuato, members of the Sowing Community Organization received threats on their lives and those of their families.

On July 12, a dialogue was held with the participation of the Guanajuato Governor Diego Sinhué, Secretary of the Interior Luis Ernesto Ayala, Assistant Secretary Alfonso Ruiz Chico, and members of the “A tu encuentro” and “Sembrando Comunidad” collectives, who demanded the closure of the investigation files against their arrested members and a public apology from the Governor of Guanajuato.  On July 20, a response was received from Governor Diego Sinhué, who failed to mention the open investigation files and watered down the responsibility of the Guanajuato state authorities in the  events  of July 10. These omissions were made known by the collectives in a public response to the governor on July 23.

We of IM-Defensoras, the National Network of Women Human Rights Defenders in Mexico, Aluna, Serapaz, and Fundar deplore the acts of repression against those exercising their legitimate right to protest, the excessive use of force, and the arbitrary arrests perpetrated by the Guanajuato State Police Forces, and we demand that the responsible state and federal institutions foster the closure of the investigation files that are still open and an immediate end to the criminalization of Isela Berenice Olimpia Montoya Juárez, Karla Verónica Martínez Jiménez and Verónica Durán Lara.

We also demand that all responsible state and federal government institutions guarantee the security, integrity, and right to protest and that they defend the rights of all members of the “A tu encuentro” Collective and the Sowing Community Organization.

We call on the international community to stand in solidarity with the tireless search for disappeared persons carried on by more than a hundred families who make up the “A tu encuentro” Collective.