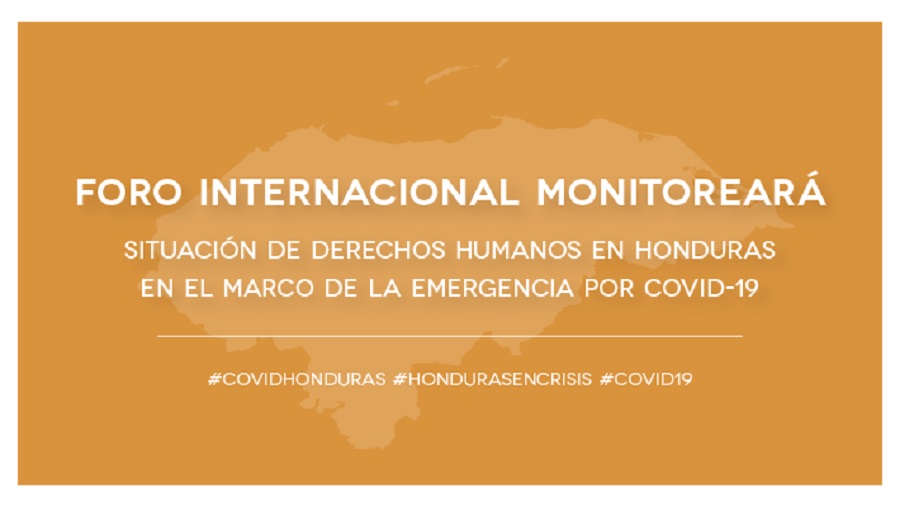 [Americas & Europe, 7 April 2020] – Historically, Honduras has faced profound challenges in guaranteeing human rights. The country is one of the most violent in the world; it has one of the highest rates of perception of corruption, impunity is rampant, and 66% of its population live in conditions of poverty. Against this background, the defense of human rights in the country requires an extraordinary effort.

Faced with this situation, 35 international and national organizations with extensive experience in the promotion and defense of human rights have collaborated to establish the “International Forum for Human Rights in Honduras” in order to monitor and visibilise the situation of the country at the international level, generate analysis and joint actions based on international standards, and guarantee compliance with the human rights standards for the entire population.

In particular, in the context of the global emergency caused by the COVID-19 virus, the Forum will monitor the measures implemented by the Honduran State to respond to the crisis and their impact on more vulnerable parts of the population.

We are concerned that the health emergency, coupled with a precarious health system, weak institutions, the shortage and privatization of water resources, and serious problems of corruption, militarization and exploitation of natural resources will deepen the risks faced by the Honduran people. The Forum denounces the measures taken by the State of Honduras to the crisis, both in its actions and omissions, including the suspension of constitutional guarantees, which enable new human rights violations.

In recent weeks, the lack of adequate conditions in hospital centers for patient care has been reported, as well as the lack of supplies and biosecurity measures for health personnel. There is also a concern about possible acts of corruption regarding the budget allocated to address the crisis.

Among the violations already reported have been: documented attacks against at least 45 human rights defenders and 7 journalists; the arbitrary arrest of WHRD Aleyda Huete in the Choluteca department, as well as the killing of WHRD Iris Argentina Álvarez during a violent eviction while a curfew was imposed; the eviction of at least 60 migrants of Haitian and African origin; water shortages in different areas of the country; and many other cases.

The situation of overcrowding and militarization faced by prisoners incarcerated in Honduran prison system, where they lack the necessary conditions to prevent contagion, is worrying. In particular, we denounce the situation of criminalized human rights defenders, such as the Guapinol water defenders, who remain in preventive detention despite the multiple appeals filed for more than 7 months.

The International Forum for Human Rights in Honduras insists that no measure to respond to the pandemic must allow for or excuse human rights violations. Nor should these measures prioritize private or business interests, particularly in the extractive sector, over the general wellbeing of the population. Rather, measures must be proportional and necessary for the prevention, diagnosis, treatment, and containment of the pandemic, have uphold fundamental human rights norms and have a gender focus, and be developed with the participation of civil society organizations.

The State, as guarantor of the health protection and subsequently of the right to life, must guarantee that the entire population, without discrimination, has access to the preventive measures recommended by the World Health Organization (WHO), including proper diagnosis and treatment, access to water and necessary biosecurity conditions. At the same time, the access of the entire population to relevant, timely, clear, scientific and quality information on the pandemic must be guaranteed, and the work of independent journalists must be also be guaranteed.

We call on the State to recognize the essential work of defenders of human rights, land and territory, and guarantee the necessary conditions so that they can work in safety. The State must stop repression against and criminalization of the population and refrain from employing the military in public security tasks or in the administration of prisons.

We demand that the Honduran authorities adopt measures to reduce prison overcrowding, facilitate alternative measures rather than pretrial detention for detained HRDs, and guarantee the conditions for the prevention and treatment of the virus in prisons, as called for by international organisations. The measures taken in this regard should not mean the liberation or excuse of responsibility for people prosecuted or sentenced for serious crimes or human rights violations.

In general, we require the Honduran State to take differentiated measures to guarantee the human rights of the most vulnerable segments of the population, such as prisoners, persons with disabilities, migrants, indigenous and Afro-Honduran peoples, human rights defenders, journalists, older adults, LGBTIQ + people, homeless people, sex workers, health personnel, women, boys and girls. The State must respond by guaranteeing the life, integrity and health of all people, and, in the face of the economic effects of the crisis, guaranteeing the means of subsistence, food, housing and work, without discrimination. This in accordance with the various guidelines indicated by international organizations.

The International Forum for Human Rights in Honduras will remain vigilant in monitoring the human rights situation in the country, and will denounce any violation and demand that the State respond to the COVID-19 emergency in accordance with its international obligations.

From this new collaborative effort, the following organizations that comprise the Forum reiterate a commitment to guaranteeing the human rights of the entire Honduran population.