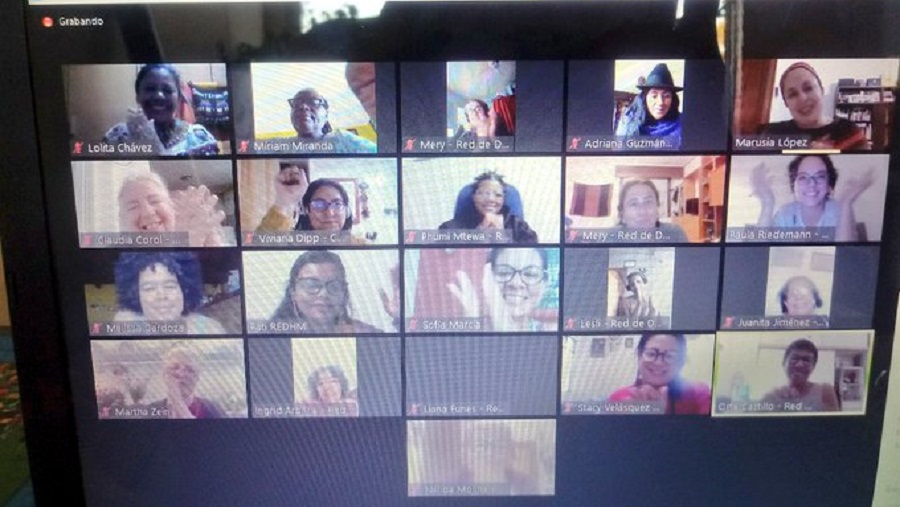 We met to talk about life. On Monday, April 6, 369 women from Abya Yala, the Spanish State, and other parts of the planet got together in a webinar presided over by Lolita Chávez and Miriam Miranda, and moderated by Marusia López. The event was organized by the K’iche Peoples Council, Calala Women’s Fund, Píkara Magazine, Basque Agency for Development Cooperation, National Network of Women Human Rights Defenders in Honduras, Black Fraternal Organization of Honduras (Ofraneh), IM-Defensoras and Network of Honduran Migrant Women.

The webinar was called “Let’s Talk About Life: Women defenders of territory and common goods provide wisdom and alternatives in current crisis,” and it connected defenders from Central America, South America, Mexico, the Spanish State and South Africa in a virtual encounter. Participants spoke of the risk posed for women and peoples by the capitalist, racist, patriarchal response to the crisis, and stressed the urgency of feminist community organization in and from the territories to deal with the crisis.

Lolita Chávez began the conversation by stressing the importance of speaking out instead of staying silent. “We are peoples of love who generate vast creativity… It is important to bring forth and communicate our knowledge. We must talk about what we are doing in the territories; silence only favors the great powers.”

Miriam Miranda pointed out that this pandemic reveals the need to generate a response based on the ancestral knowledge of the communities now faced with failed, genocidal states. “The political class will never have an answer. It is not interested in human beings, only in business,” she said. That’s why community health centers are being organized, based on the wisdom and social fabric of the Garifuna people.

Turning to community memory… and to the South

“This pandemic serves the capitalist system well as a response to emerging social movements. It’s not happenstance,” commented the Mapuche defender Nélida Molina.

Bolivian defender Adriana Guzmán called attention to the militarization of the country and emphasized not losing sight of common sense. “The State with its military powers has never protected us. How do we ask or demand anything? We must go back to the community memory to organize ourselves.”

Various defenders agreed that for their communities and for their ancestors, health has never been strictly physical. In the Garifuna language, said Miriam Miranda, health means “the common good.” The discussion about self-care and community health was approached by all the participants, who insisted that this combination even protects them from State repression, especially in the cases of Nicaragua, El Salvador, Honduras, Guatemala, Chile, Colombia and Bolivia.

The discussion ended with a proposal to continue to look towards the South. Lolita spoke of the need for communities in the global North to turn towards Abya Yala in order to learn to weave networks and learn. “Let’s look at ourselves with humility, love, and respect…Let’s don´t build networks based on inequality,” she insisted.

Marusia López of IM-Defensoras stated that this will be the first of several similar encounters in which defenders in the entire region will share their knowledge with an eye to dealing with this crisis: knowledge that affirms collective care and ancestral wisdom, knowledge that questions the current system.