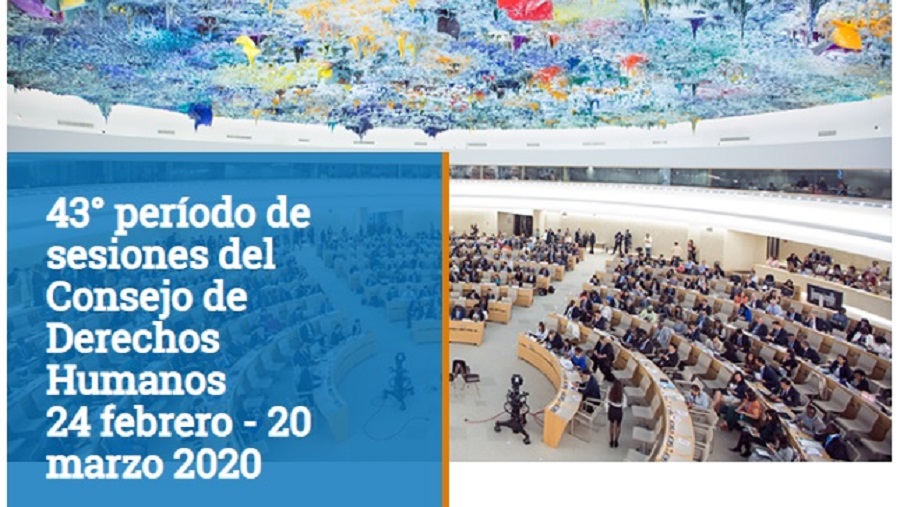 We’re at the 43rd Session of the UN Human Rights Council. Our goal: to position Mesoamerican women defenders -and the attacks they face- among issues dealt with on the official agenda and in parallel activities.

Why? So that the governments, international bodies and the entire world will hear us.

The UN Human Rights Council is an intergovernmental organ of the United Nations, made of 47 member nations charged with promoting human rights worldwide.

On February 27, we co-organizated an event on the “Human Rights Crisis in Nicaragua”, together with Race and Equality, Cejil, Civicus and FIDH. The event featured the participation of Clément Nyaletsossi Voulé, the Special Rapporteur on Rights to Peaceful Assembly and Association; Joel Hernández, Commissioner of the Inter-American Commission on Human Rights (IACHR); and women human rights defenders in Nicaragua. During the week of March 2 to 6, we will participate in the Women Human Rights Defender Week, debating matters related to the role of defenders in conflictive situations. With our gender-based analysis, we will explore the freedom of religion and cultural rights in public debate situations, among many other issues.

To this end, we are co-organizing a discussion on March 4, with voices from Kenya, Nicaragua, Honduras, El Salvador, Colombia, Southern Sudan, Chile, Indonesia, Namibia, Sudan and Armenia. We will talk about the role of women defenders in situations of conflict, their demands and needs, and furthermore, will send out a call to UN human rights organizations to fortify the acknowledgment and protection of women defenders. That same day at 4 pm, we have presented preliminary data from our biennial Report on the Criminalization and Attacks on Women Defenders in Mesoamerica 2017-2018.

At this event we disclosed just how much the situation of women defenders has worsened in one of the regions where it is most dangerous to be a woman and defend human rights, and will also identify the main causes of criminalization, and the main aggressors. During the week of March 8 to 13, we will participate in the Commission on the Legal and Social Status of Women (CSW) in New York. In discussions that involve the voices of women defenders in decisions made by governments and the civil society, we will also be presenting preliminary data from our biennial report.