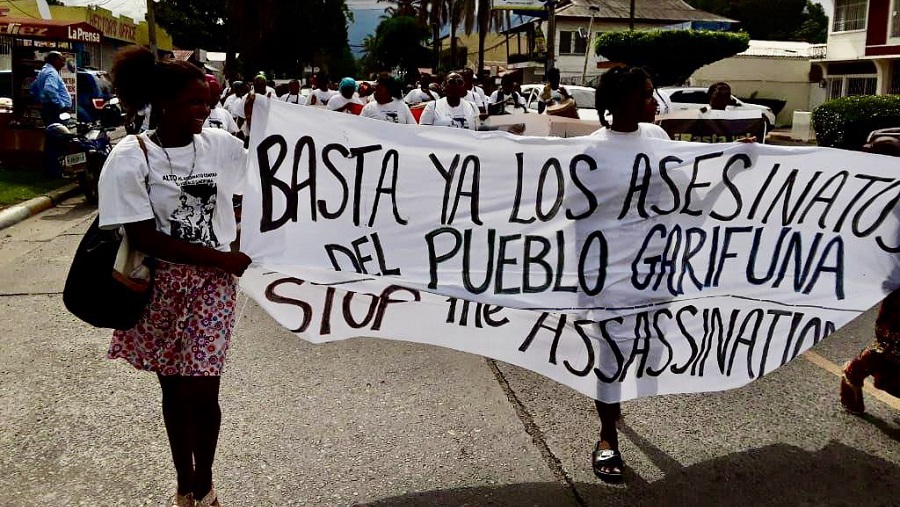 THE FACTS – On Saturday, January 11, the Honduran defender Karla Ignacia Piota Martínez died from seven bullet wounds she received in an attempt on her life in the Garifuna community of Masca last December 28. Karla was the sister of Ermelinda Piota Martínez, a member of OFRANEH´s general coordinating group.

This is the fourth murder or attempt on the life of someone close to Ermelinda. On December 12, assailants shot up her home and wounded Paula Álvarez in the incident. Before that, three other companions of hers were killed, including the Garifuna defender Mirna Suazo.

OFRANEH has repeatedly denounced the fact that Masca has become an epicenter of violence related to land grabs exacerbated by racism. Evidence confirms that this is a strategy for expelling the Garifuna people from their ancestral territories.

The National Agrarian Institute has issued titles to territories that legally belong to the Garifuna communities, thereby fostering the land ownership of alien third parties. This has placed the Garifuna people in the center of a wave of violence promoted by ambitious financial groups eager to divide the territories into lots by means of a strategy of terror and annihilation.

These murders and other attacks are taking place in a context of extreme vulnerability for Garifuna women defenders, who must deal with the fear generated by powerful groups working in alliances with the Honduran Army and government authorities. Moreover, they face the institutionalized racism and male chauvinism that hinder their work as women defenders, and the symbolic violence with which news outlets treat their struggles and abuse their image.

We of IM-Defensoras lament this terrible news and express our solidarity with the family of Karla Ignacia Piota Martínez and with OFRANEH.

We demand that the Honduran government conduct a thoroughgoing investigation of this murder to see that justice is done and that impunity does not prevail for the crime.