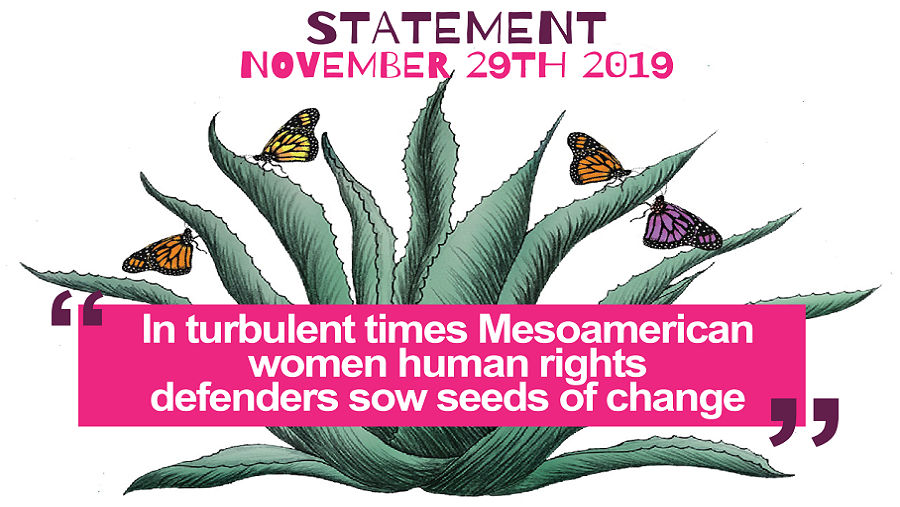 Mesoamerica, November 29, 2019 – The day dawns in an Abya Yala experiencing turbulent times. In uprisings for democracy and social justice, our sisters in Chile, Colombia and Bolivia are facing brutal repression by their governments, while authoritarianism, neoliberal policies, extractivism and religious fundamentalisms sweep the region in a blatant display of racism and misogyny. In our Mesoamerica, the panorama does not differ.

In Nicaragua, the socio-political and human rights crisis experienced in the country since April of 2018, far from coming to an end, continues to deepen through repression of peaceful protest and paramilitary violence against activists and women defenders. Bearing painful witness to this situation are seven comrades still being held as political prisoners this November 19th, and dozens of women defenders in exile.

In Honduras, ten years after the coup d’etat, corruption reigns and organized crime runs amok within a government that represses people who are exercising their legitimate right to protest. Impunity is guaranteed for corporations that usurp lands, for the assassins of Berta Cáceres, and for the perpetrators of criminal violence against communities, especially the women, as in the case of the Garifunas, while rights defenders are criminalized.

In El Salvador, women continue to be the victims of femicide and are criminalized for having abortions and for denouncing abuses and sexual violence. Our comrades in the LGBTI communities are cruelly murdered with absolute impunity, while hate speech runs rampant in social networks and news media, with the connivance of well-known government officials.

In Guatemala, the State reinforces its corrupt practices by expelling the International Commission against Impunity in Guatemala (CICIG) from the country and passing laws that threaten human rights organizations and the fundamental rights of the people. Women continue to be murdered, with 571 so far this year, and women defenders, especially those of indigenous peoples, are attacked and criminalized for defending our land and communities.

In Mexico, women journalists are killed and attacked for exercising the right to free expression and the right to inform, while feminist activists are subjected to hate speech and criminalization for denouncing violence against women and for defending the right to decide about our bodies. Those who defend the rights of migrant persons are the targets of systematic attacks in the context of the migration pact signed by the governments of Mexico and the United States.

All of this has an obvious impact on the risks we face as women human rights defenders in the region. According to preliminary data from our Registry of Attacks, in 2018 a total of

For the 2017-2018 period, the defenders of land, territory and the environment continue to suffer the most attacks (1,014), followed by those who defend the right to truth, justice and reparations (666).

Actors related to the State (police, military forces, state and federal authorities) continue to be the vast majority of those responsible for the attacks.

In this context of violence, women continue in the forefront of all struggles in all countries and communities. We are increasingly visible in the streets as we resist from the position of our bodies-territories, stand shoulder to shoulder with each other, and weave sisterly networks that protect us and make us stronger.

At the dawn of this turbulent November 29th, we of IM-Defensoras and the comrades in our networks in El Salvador, Guatemala, Honduras, Mexico and Nicaragua, send a warm embrace to all women defenders in Latin America, in our Abya Yala, with the conviction that together we are stronger and that the seeds of change continually sown by each and every one of us through our struggles and our resistance are preparing the land for a brighter future with Life at the center.