“In Nicaragua nothing is normal”: organizations present evidence that human rights crisis in the country is still in effect 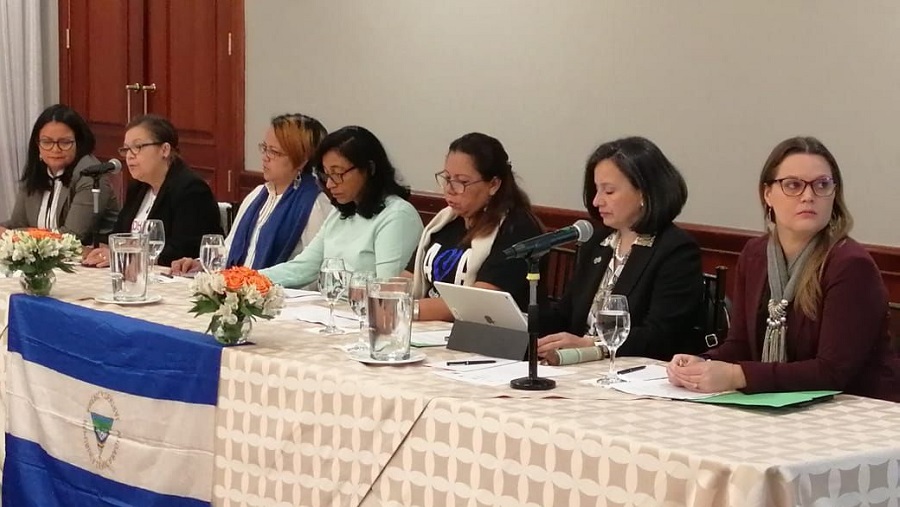 Quito. Ecuador. November 13, 2019. Nine international and local human rights organizations denounced the precarious human rights situation in Nicaragua in an event that took place during the 174th Period of Sessions of the Inter-American Commission on Human Rights (IACHR).

In this space for denunciations and analysis of the situation in the country, participants noted a steady institutional deterioration that limits the exercise of human rights. According to data presented by diverse human rights organizations, at least 328 persons have died during protests and more than 80 thousand have been obliged to migrate as a result of the political crisis that broke out on April 18, 2018.

Marlin Sierra, Director of the Nicaraguan Center for Human Rights (CENIDH), presented current challenges to the freedom of expression, assembly and association, denouncing the existing difficulties in carrying out the work of defending human rights in the country and the situation of persecution, harassment and threats that defenders constantly face, ascertaining that “in Nicaragua nothing is normal.”

Ana Patricia Sánchez, a victim of arbitrary arrest and spokewoman of the Union of Political Prisoners of Nicaragua, exposed the situation of released prisoners and their families: “For those of us who were arbitrarily arrested in Nicaragua, life is far from normal; we can’t find work, we aren’t able to pursue our studies, and our famílies continue to be harassed.”

Lottie Cunningham, President of the Center for Justice and Human Rights of the Atlantic Coast of Nicaragua (CEJUDHCAN), denounced the impact of the crisis on indigenous and Afrodescendant peoples in Nicaragua’s Caribbean Coast Autonomous Region (RACC): “At least 21 indigenous and Afrodescendant territories made up of 270 communities are invaded by settlers, most of whom are ex-military agents with government support.”

Lizeth Dávila, Vice President of the “Mothers of April Association” (AMA), discussed the obstacles in the struggle for truth, justice, reparations, and non-repetition, and urged the international community to “raise its voice so that the murders of our children will not go unpunished. We mothers aren’t giving up and we aren’t selling out.”

María Claudia Pulido, Assistant Executive Secretary for Monitoring, Technical Coordination and Promotion of the IACHR, presented the perspective of the Inter-American Commission of Human Rights in Nicaragua, pointing out that “the greatest challenge facing the human rights monitoring organizations is to expose the fact that the repression continues. Although massive arrests and visible attacks are not taking place, we are facing a highly serious situation.”

Alejandra Manavella, Coordinator of Advocacy Strategies for the Mesoamerican Center for Justice and International Law (CEJIL), presented closing words and conclusions, underscoring the way in which “the narration of reality by the panelists outdoes the State narrative: “Restrictions on the rights of the people continue. Repression takes on new forms but does not cease. On the contrary it tends to get worse.”

Astrid Valencia, Central America Researcher at Amnesty International noted that panelists highlighted the fact that “the situation in Nicaragua has not improved; human rights are still under attack in the country.”

The event was also attended by a representative of the Office of the UN High Commissioner for Human Rights who stressed that “the rights of victims to truth, justice, reparation and guarantees of non-repetition are the cornerstone of the reconstruction of a society that has experienced massive and serious human rights violations as has been the case in Nicaragua in the last year and a half. ”

The event took place in a context of ongoing repression against civil society organizations, activists, journalists, and opposition leaders. In December, 2018, Nicaraguan authorities canceled the legal status of nine organizations in violation of the right to association. In addition, more than 130 persons are still confined for being considered government opponents.