ALERT TO THE INTERNACIONAL COMMUNITY: Today pain and rage pierce the skin of our Latin America once more 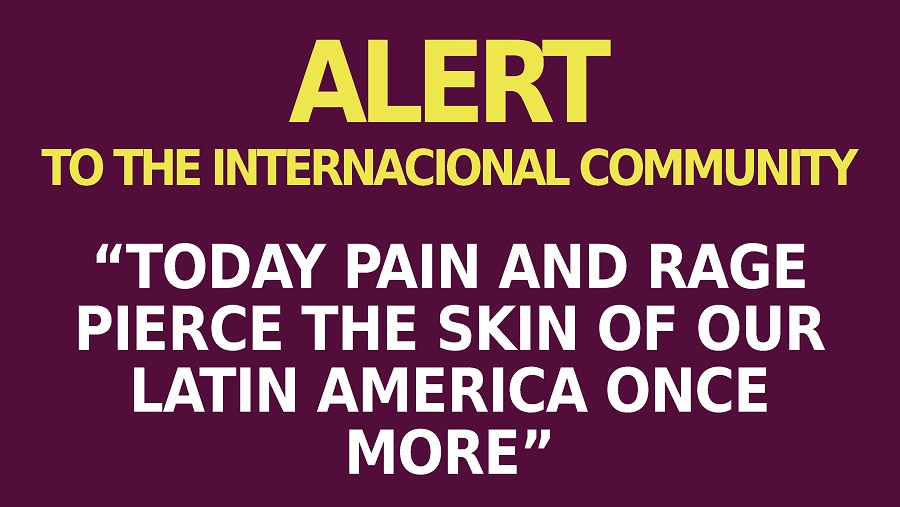 Our Latin America, our Abya Yala, is going through turbulent times. The repression, mutilation and disappearance of women’s bodies in Chile. The racism and religious fundamentalism leading to rapes and beatings of women wearing traditional skirts in Bolivia. The brutal murders of Garífuna women and the looting of their communities. Sexual torture as a form of control over our bodies that imposes terror throughout our territories.

We are witnessing the collapse of representative partisan democracies historically used to legitimate privileges and oppressive structures. The State in each country, coopted by private interests and eaten away by corruption and impunity, imposes deadly policies that drive back the rights and freedoms already won, especially by women and indigenous peoples.

We raise our voices in repudiation of the repression of protests and the persecution of human rights defenders.

We denounce and reject authoritarianism, waves of violence, the rise in the power of the Army and its repressive functions, structural racism and misogyny, the upsurge in religious fundamentalism, voracious extractivism, the growth of criminal mafias, the extension of neoliberal policies and their interventionist rationale.

All this is being catalyzed during complex times of political instability that bring a further infringement of plurinational, grassroots, community based sovereignty.

WE, THE WOMEN DEFENDERS OF MESOAMERICA join in with movements of feminists, youth, students, workers, Afrodesdendants, and sexually diverse persons, together with indigenous peoples committed to the defense of the land and their bodies-territories, to sound an ALERT TO THE INTERNATIONAL COMMUNITY:

We reaffirm ourselves as we join together with all libertarian movements to weave networks for shouldering our struggles, for collective self-care, and for developing emancipatory proposals from our countries, communities and territories.

WITH A SISTERLY EMBRACE, WE SEND OUT OUR CALL TO ALL COMPAÑERAS IN LATIN AMERICA AND THE CARIBBEAN TO KEEP ON SOWING LIFE, DIGNITY AND JUSTICE.