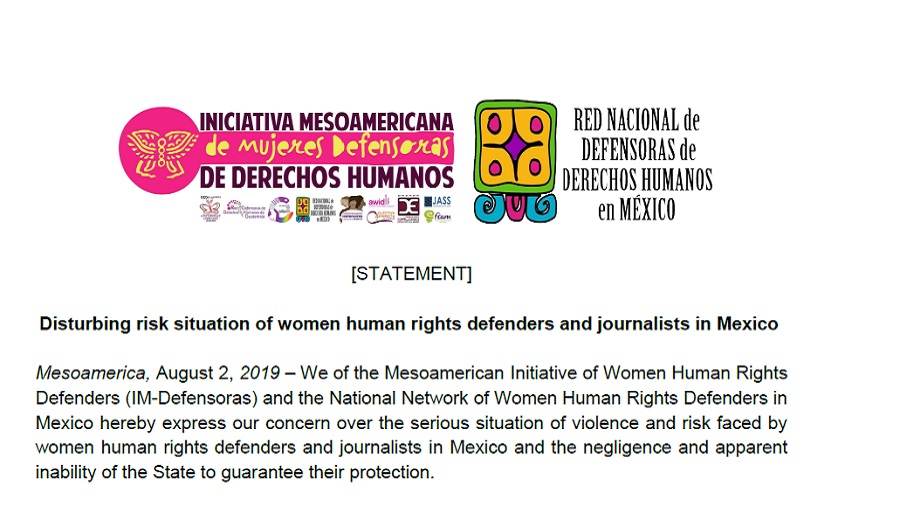 Mesoamerica, August 2, 2019 – We of the Mesoamerican Initiative of Women Human Rights Defenders (IM-Defensoras) and the National Network of Women Human Rights Defenders in Mexico hereby express our concern over the serious situation of violence and risk faced by women human rights defenders and journalists in Mexico and the negligence and apparent inability of the State to guarantee their protection.

Counting the murder of Zenaida Pulido last July 19th, a total of 5 women defenders and journalists have been killed in Mexico since the beginning of 2019. According to data from the permanent office in Mexico of the United Nations High Commissioner for Human Rights, Michelle Bachelet, the total number of murders of human rights defenders during the current year has risen to 14, matching the number of the same type of crime perpetrated throughout 2018.

In recent days, several women journalists and communicators have been subjected to attacks of various kinds: Lydia Cacho suffered a house raid with theft of sensitive information just after the State lifted her previously granted protection measures; the house of the communicator Nidia Hernández, in Puebla, was shot up; and the twittera Frida Guerrera has received several different threats of death and sexual violence through social networks.

Nor does the government contribute to guaranteeing protection for defenders and journalists, as seen in the discourse from the highest levels of the State that often calls their work into question, discrediting them and making them the target of different kinds of attacks of diverse origin.

We are especially concerned about the attacks against organizations and individuals who defend migrant rights and the rise in their criminalization. Coupled with the deployment of the National Guard to carry out migration control work, such aggression inhibits the defense of the rights of the migrant population in the current context of heightened migratory flow. Following the recent pact between the governments of Mexico and the United States regarding migration, several shelters have been raided by the National Guard and several defenders have been subjected to attacks in states including Baja California and Sonora.

For years this country has been plunged into a deep crisis of widespread violence that manifests itself in scandalous figures of murders, feminicides, disappeared persons, kidnappings, trafficking in persons, extrajudicial executions, forced displacements, corruption, and impunity as a consequence of the application of neoliberal policies that have led to the rise of organized crime and the extractive economy. We believe that in this context, the work of those who defend human rights and those who, through their journalism, denounce and document rights violations, is essential in reversing the situation and bringing about the necessary transformation of the country.

In the current context of violence, women defenders and journalists facing gender-based structural and historical discrimination are exposed to different kinds of risk situations; thus, public recognition of their work is essential for their protection, as is the adaptation of protection mechanisms to their specific needs and circumstances.

For all of the above, we of IM-Defensoras and the National Network of Women Human Rights Defenders in Mexico demand that the Mexican government do the following: