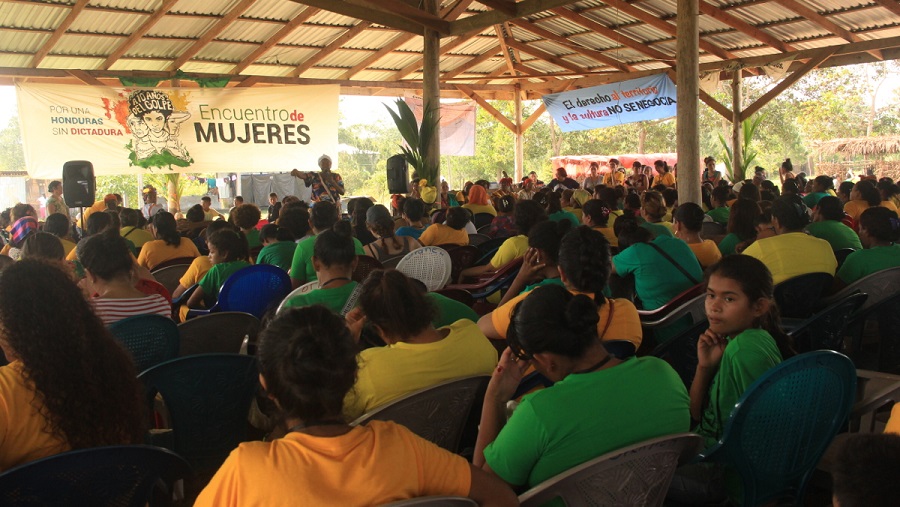 With the ancestral presence of Margarita Murillo, María Enriqueta Matute, Berta Cáceres, Maudalena Morales and Aunt Macucu, who were there in spirit, though,t and strength, we felt the energy of the Tolupán, Lenca, Misquito, Garífuna, Pech, and Maya Chortí peoples and that of all peoples in struggle as we came together ten years after the coup d’état and the resistance of the people of Honduras, the women of Honduras.

The gathering saluted the strength and rebelliousness of women, of those who were present, those who didn’t come, and those who are no longer with us physically. Despite the wounds and pain from the violence and oppression that struck our bodies, territories and organizing processes, we have an enormous conviction and determination to keep on thinking, creating and acting together.

The force of the world view of indigenous peoples was ever present in their spirituality, wisdom, experiences of resistance, and ways of relating to life and nature. In debates and conversations during meals, rest periods and work, we put together the words that we share with you now.

We are worried about the rise in normalized violence against women’s bodies, which become a territory marked by the frustration of a machista, hetero-patriarchal culture, often conveyed by men from social movements and emboldened by heightened militarization and religious fundamentalism. It is true that women have endured reverses, but at the same time, the role of women in the struggle has gained strength, with greater political clarity, knowledge, and the ability to mobilize and inspire others in different struggles where we put forth our thoughts, voices, bodies and action. No amount of violence will stop us now.

We commit ourselves to keep on coming together in collective rebellion, to embody all of our struggles, and to re-imagine a Honduras without a dictatorship, but with autonomy and sovereignty for the people, for women.

Ten years after the coup, we continue struggling together.
For a Honduras without dictatorship.
Vallecito, Iriona, Colón June 29, 2019