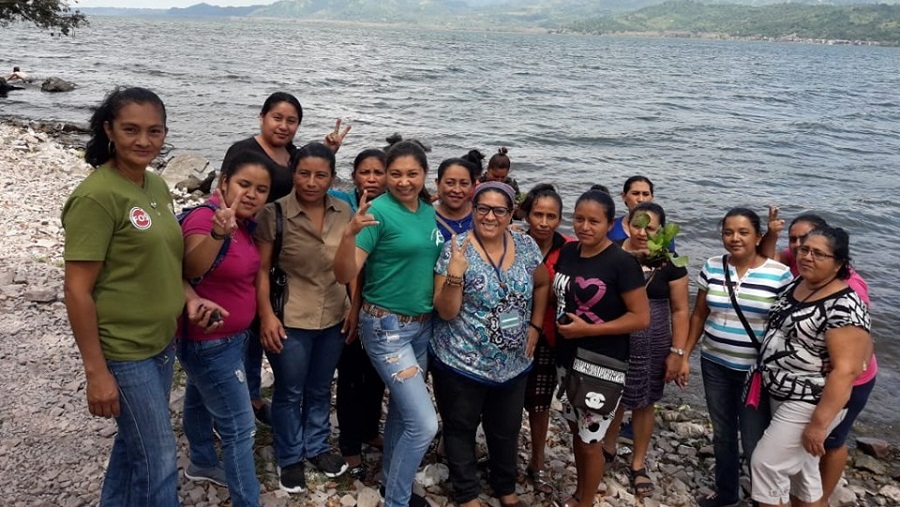 National Network of Women Human Rights Defenders in Honduras – Betty Vasquez tells us that they now have a majority of women in the organization and that many of the local councils are led by sisters. It’s no coincidence that Betty leads the organization that she and other women and men founded, the Santa Barbara Environmental Movement (MAS).

In addition to her political and work activities, she has raised two young people and takes care of her mother, who tells her, “You look a lot like a daughter of mine”, to which Betty responds, “And you look a lot like my mother.” Her mother suffers from Alzheimer’s, so her daughter visits her and takes care of her like any woman caregiver, enjoying the afternoons she is with her and preparing dishes that her mother taught her to make.

In the small MAS office, full of images of women in struggle and of Berta, and accompanied by Eylin and Carmen, she talks about how she has introduced MAS to community committees for the defense of territories in 18 towns. As of last May, 14 towns have been declared free of extractivism, including mining, hydroelectric plants, and migrant coffee cultivation.

Members are working on a publication with information about current conflicts, and not only do mapping, but also highlight resistance efforts and present important information on today’s struggles. MAS has also published data about the condition of the Lenca people in several towns, some of which is welcomed by local governments, as is the case in Macholoa. Bety, with her free-flowing narration, describes in considerable detail the legal aspects of local power structures and the impact of the introduction of certain megaprojects. Territorial defense with the face of a woman is emblematic for the organization, and members often work with women mayors who support environmental justice.

MAS works for recuperation instead of consumerism, recovering seeds, foods and native plants in trading tables organized in all MAS spaces. Members also set up tables for sharing food, so they don’t buy lunch or snacks, but instead bring burritos, fruit, coffee and bread not wrapped in plastic. They also use plates that can be washed and large durable bags, tablecloths and banana leaves to recover good flavor and good eating.