[STATEMENT] Stop the repression of social protest in Honduras! 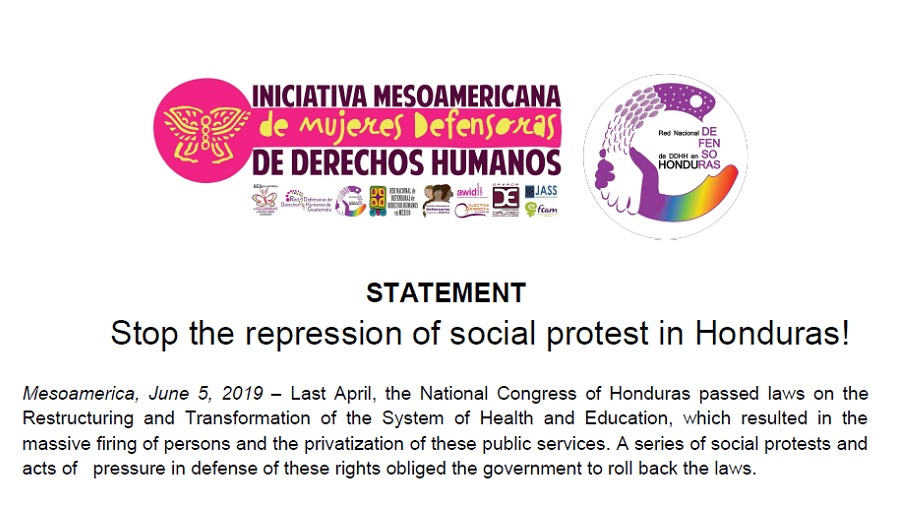 Mesoamerica, June 5, 2019 – Last April, the National Congress of Honduras passed laws on the Restructuring and Transformation of the System of Health and Education, which resulted in the massive firing of persons and the privatization of these public services. A series of social protests and acts of pressure in defense of these rights obliged the government to roll back the laws.

A few days later, however, the Presidential Cabinet approved new bills along the same neoliberal lines, sparking the organization of the Platform in Defense of Public Health and Education in Honduras. This movement has brought together workers’ organizations, members of the civil society, women, students, indigenous peoples, and campesinos to fortify the struggle in defense of health and education.

Since their struggle began in April, it has been met with heavy repression and abuse of power by police and military forces. Agents have not only used firearms, but routinely use massive amounts of tear gas and rubber bullets to attack persons engaged in different forms of peaceful mobilization in exercise of their legitimate right to social protest.

Widespread persecution of demonstrators has also taken place through beatings, arbitrary arrests, and extra-judicial executions. In many cases such acts are brutally perpetrated during the mobilizations in order to generate terror and create anxiety among those who have organized and mobilized to defend their rights.

According to information available to the National Network of Women Human Rights Defenders in Honduras, at least 25 arbitrary arrests have occurred in Tegucigalpa, San Pedro Sula and La Lima alone.

The basic majority role that women have played in the areas of health and education is undisputed. The privatization and increasingly precarious nature of these services reveal a level of structural violence that especially affects women’s professional labor rights in both fields, and the right of all women and their families to free, public, quality health and education. This is why Honduran women, including students, doctors, nurses, mothers, professors, teachers, human rights defenders and many others are in the forefront of this struggle, which also means that they are highly exposed to the repressive action of the State that targets their bodies as well as their physical and moral integrity.

We wish to emphasize the criminalization and death threats against women defenders in different territories, especially those received by Suyapa Figueroa, a member of the coordinating group of the Platform in Defense of Public Health and Education in Honduras.

In view of the above, we of IM-Defensoras and the National Network of Women Human Rights Defenders in Honduras: