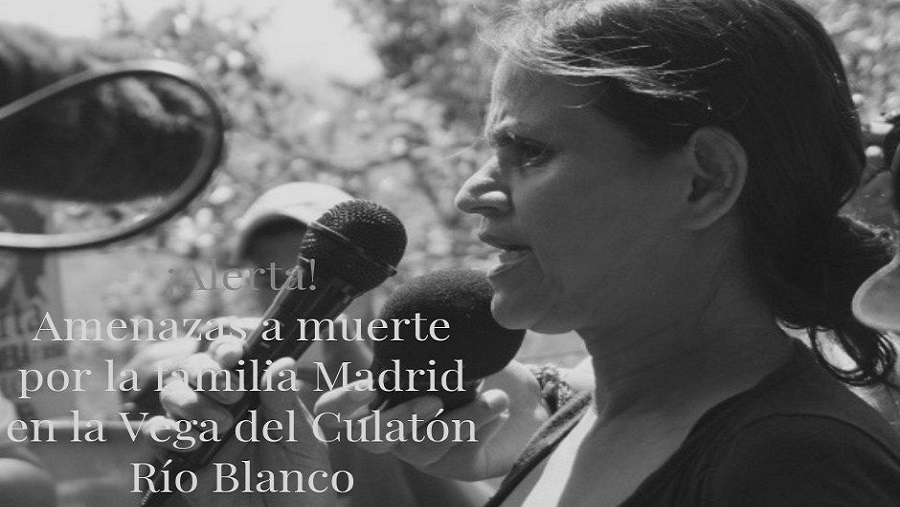 THE FACTS – According to information obtained by the National Network of Women Human Rights Defenders in Honduras, defender Rosalina Domínguez and other COPINH members have been subjected to constant threats and intimidation since Monday, April 29th.

These attacks have taken place in “La Vega del Culatón” (the border area between the town of San Francisco de Ojuera, in the Santa Bárbara region, and the town of Intibucá, in theIntibucá region), where Rosalina Domínguez and other COPINH members have begun to farm lands that the #DESA Company plans to use for its “Agua Zarca” Project.

It was reported that members of the Madrid family arrived at the scene armed with .38 calibre pistols and machetes, and proceeded to intimidate and threaten Rosalina; young Arnold Sánchez, Fredi Sánchez, Amos Sánchez, Leonidas Sánchez, and Salomé Rodríguez; and Mrs. Cornelia González, among others.

The threats have been primarily aimed at Rosalina, who is considered the “organizer” of the group. The aggresors have gone so far as to say that they will kill her “the same way they did señora Berta,” in reference to Berta Cáceres.

We of IM-Defensoras and the National Network of Women Human Rights Defenders in Honduras hereby express our maximum respect for Rosalina Domínguez and our acknowledgement of her struggle and that of her companions in COPINH in defense of the ancestral lands of the Lenca people. We demand guarantees for their protection and furthermore, demand that all relevant legal measures be taken against those responsible for the attacks.We hold the Honduran government responsible for any harm that may befall the comrades.