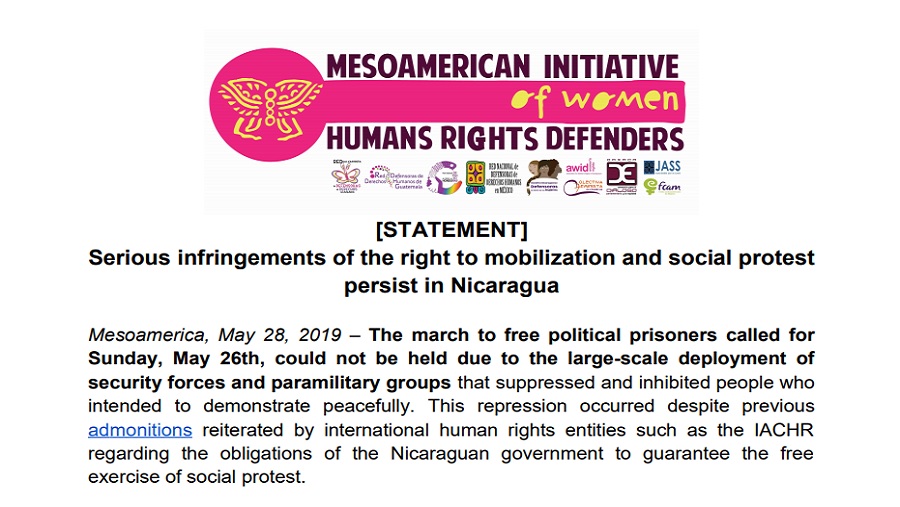 Mesoamerica, May 28, 2019 – The march to free political prisoners called for Sunday, May 26th, could not be held due to the large-scale deployment of security forces and paramilitary groups that suppressed and inhibited people who intended to demonstrate peacefully. This repression occurred despite previous admonitions reiterated by international human rights entities such as the IACHR regarding the obligations of the Nicaraguan government to guarantee the free exercise of social protest.

According to information available to IM-Defensoras, Managua, the capital of the country was already militarized at the crack of dawn. Throughout the day acts of repression were committed against the population, resulting in three persons wounded (two of them women) and seven subjected to arbitrary arrest (including one woman).

Ever since the outbreak in April 2018, of the political and human rights crisis that Nicaragua is going through, the repression of social mobilizations has been a systematic State strategy to inhibit and hinder the legitimate right of the population to protest and express disagreement with the government. As part of this strategy, at least 730 persons have been held political prisoners, of whom 227 continue to be deprived of their freedom and 401 have been released with convictions or cases still open. Just as recently denounced by the #SetThemFree Campaign , this situation affects 45 women, of whom 10 are still being held in extremely precarious conditions.

In this context, the work of women human rights defenders and their organizations is also negatively affected by higher levels of risk and aggression that puts their development in danger. Their work is basic in the monitoring, accompaniment and documentation of the infringements of human rights that expose the population to greater defenselessness, especially the most vulnerable sectors.

We of IM-Defensoras hold that an advance towards a peaceful solution of the current conflict can only be reached in a framework of total respect for the human and political rights of the Nicaraguan people. This involves guaranteeing the free exercise of social protest; granting the total liberation with no charges pending of all political prisoners; and putting an end to the persecution of journalists, social movements, organizations and individuals engaged in the defense of human rights.

And once again, we urge the international community not to turn your gaze away from Nicaragua, but instead to stay tuned to the grave sociopolitical and human rights crisis that continues to afflict the country, producing many violations of the basic rights of the population.