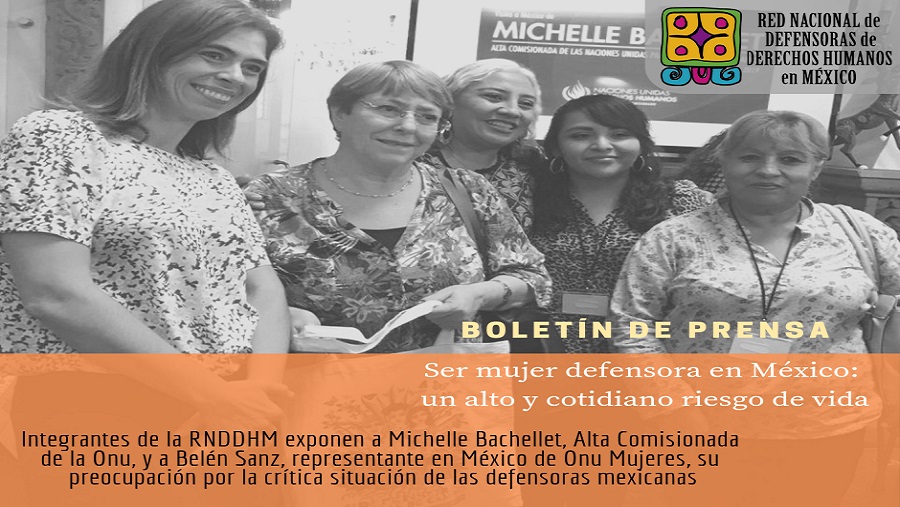 Mexico, April 9, 2019. On April 6th, members of the National Network of Women Human Rights Defenders in Mexico (RNDDHM) expressed their concern to Michelle Bachelet, UN High Commissioner for Human Rights, and Belén Sanz, the representative of UN Women in Mexico, over the critical situation of Mexican women defenders, who carry out their labor in the midst of a human rights crisis and structural, patriarchal violence.

Women defenders in Mexico face daily situations of high risk to their lives, an extenuating collective dynamic, and elevated stress levels, with negative consequences for their physical, emotional, mental, energetic and spiritual health, said the members of this civilian network through the voice of Flor Goche, their coordinator.

According to the Registry of Attacks against Women Human Rights Defenders in Mexico, 1 one attack against a woman defender occurs every day. The number of violent acts tripled during Enrique Peña Nieto’s term of office and continues to rise during the new Andrés Manuel López Obrador regime, with 130 taking place so far. Of these, two defenders have been killed, 2 one disappeared, 3 and the home of another broken into, 4 just to mention a few of the most serious attacks.

The members of the Defender Network who met with the UN representatives were Coordinator Flor Goche, Driving Group member Yésica Sánchez Maya, and Nieves Rodríguez of the Peoples’ Front in Defense of the Land. Even though the New Mexico City International Airport has been canceled, Nieves Rodriguez continues to be harassed in her home in Texcoco by the Pifra construction company, which plans to conclude a work that is complementary to the megaproject.

Among the major concerns expressed by this civilian network to Michele Bachelet, during her official visit to Mexico are:

The meeting was held in the Office of the UN High Commissioner for Human Rights in Mexico. The problems of women in Mexico were approached in a general way. In addition to the situation of women defenders described by the RNDDHM, problems faced by women journalists were discussed, as well as digital attacks against women defenders and journalists. Another block of participations focused on the issues of feminicide, the disappearance of women and girls, and sexual and reproductive health.

1 An instrument coordinated by the Mesoamerican Initiative for Women Human Rights Defenders, which registers attacks against women defenders in Mexico.

2 Eulodia Díaz Ortiz of the State of Mexico, and Estelina López Gómez of Chiapas