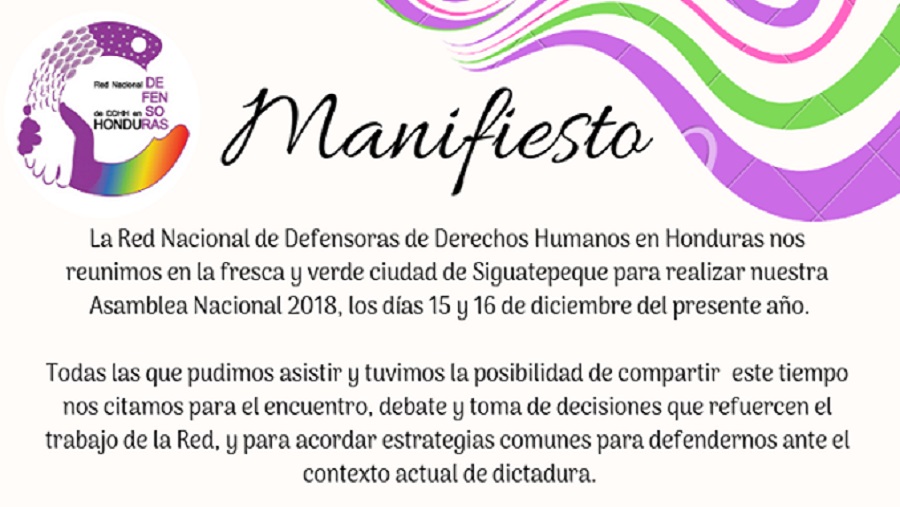 All of us who were able to attend and share this time had made the date to participate in the debate and decision-making that reinforce the work of the Network and to agree on common strategies to defend ourselves in the current context of the dictatorship.

1. We share the revalued spirituality of the indigenous peoples and the feminist culture that propose recognition of our history of struggles and of the women who have gone before us and who continue to be with us. We propose the construction of sisterhood, not as a discourse, but as a practice that we must continually learn and unlearn, for which we need to review the political practices of our feminisms.

2. We reaffirm our desire and commitment to continue the work of the defense of our bodies as the first territory against patriarchal and capitalist projects that contaminate, dispossess, criminalize and kill us.

3. We recognize the need for self-care to increasingly be a common political practice for healing our lives and for promoting the growth of projects of hope and future for us and all who struggle for life.

4. Although we acknowledge our exhaustion, impoverishment, physical and emotional wear and tear, and we know the fear that is implanted to demobilize us, we define ourselves as women, feminists and Hondurans in continual resistance who refuse to renounce our projects of emancipation as women, peoples and country.

5. We share our indignation over the systematic violence that we women and girls are subjected to in public and private spaces, violence that we also receive from men who call themselves comrades in mixed spaces and who attack our political identities and struggles. We declare that we are fed up with this violence.

6. We recognize that we are in many struggles and we propose to accompany each other with the common energy that brings us together in making a diverse feminist collective that includes indigenous women as well as university students; those who do theatre as well as those whose work is caring for homes and persons; women living with a disability as well as those who put an end to hydroelectric projects near their communities.

7. With concern and rejection, we identify the process of the appropriation of property, knowledge, and art of indigenous peoples by figures linked to the State and private businesses for their commercialization; and the political use of networks and women of the original peoples as a strategy to divide us and diminish the strength of women’s popular indigenous processes of struggle.

8. With rage and pain, we share the reality of militarization and its encroachment in our communities, and we witness the way in which educational spaces are converted into military battalions and police garrisons, making the societal priorities of this government absolutely clear.

9. We manifest our concern over the migratory exodus of Honduran people towards the United States in search of the misnamed “American dream,” but with outrage and sorrow, we see that they are expelled by the terrible conditions that the regime has established, prioritizing business interests and not the needs of the people. And we denounce the violence that women and girls are subjected to by the forces of the State all along the way. But we also recognize and are thankful for the solidarity of the peoples who in many different ways have helped to make this forced displacement less harsh for our sisters and brothers.

From this common space, we stand in solidarity with the struggle of the feminist comrades in Nicaragua who are encountering the systematic aggression of the Ortega Murillo government against not only organizations, but also the diverse feminist proposals that have been constructed by comrades for decades. For them– our words, our embrace, and our ongoing denunciation and accompaniment in every way possible.

The RNDDH Assembly agrees to continue conversing, struggling, living with dignity, sharing, learning, teaching, denouncing, accompanying and curing the life and political action of women defenders, and with them, the territories of Honduras, in the present and the future; we join together in collective processes to exchange the reality that now saddens us for a time in which our bodies will be full of joy and respect.