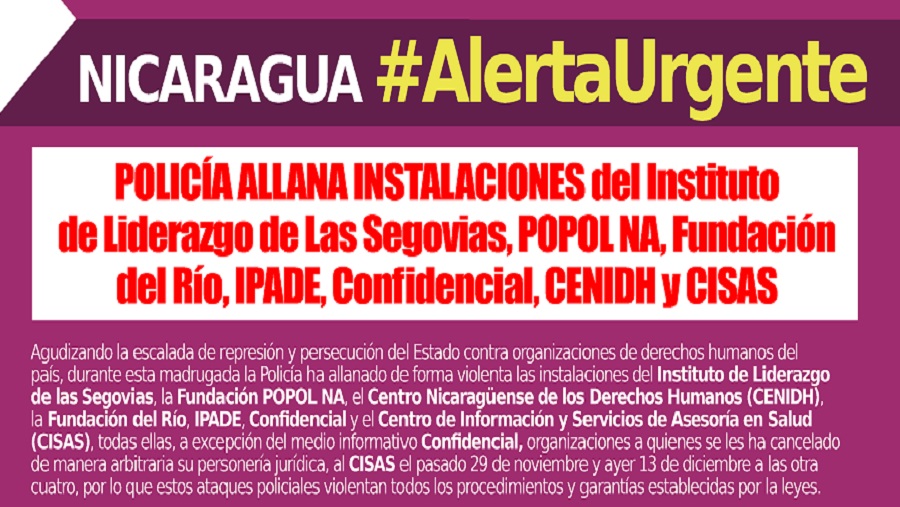 As a further escalation of State repression and persecution of the country’s human rights organizations, today in the early morning hours the Police violently broke into the spaces of the Leadership Institute of the Segovias, the POPOL NA Foundation, the Nicaraguan Center for Human Rights (CENIDH), the River Foundation, the Institute for Development and Democracy (IPADE), the newspaper Confidencial, and the Center for Health Information and Consulting Services (CISAS). Except for the newspaper, the legal status of all of these groups has recently been arbitrarily cancelled. CISAS was the first last November 29th, and yesterday the identity of four more NGO’s was anulled. The police attacks do violence to all procedures and guarantees established by law.

During the search and seizure operations, the police arreste a collaborator who was on guard at the Leadership Institute of the Segovias and confiscated computers. At the POPOL NA Foundation, the police physically attacked the mothers of political prisoners who were staying there, as well as a security guard; they also seized cell phones, institutional and private vehicles, and work equipment. From IPADE they took vehicles, and from Confidencial, administrative documents and all the work equipment of the journalists. CENIDH denounced that their porter was beaten and tied up. From CISAS they seized computers and administrative documents.

We of IM-Defensoras repudiate these arbitrary, illegal actions and demand the immediate release and presentation of the persons arrested, as well as an immediate end to the brutal campaign of repression and persecution unleashed by the government against human rights organizations. Moreover, we demand guarantees for the security of members of these organizations and hold the Nicaraguan government responsible for any violation of their physical or moral security.

The serious nature of these acts requires firm, powerful actions from the international community and official organisms and entities.