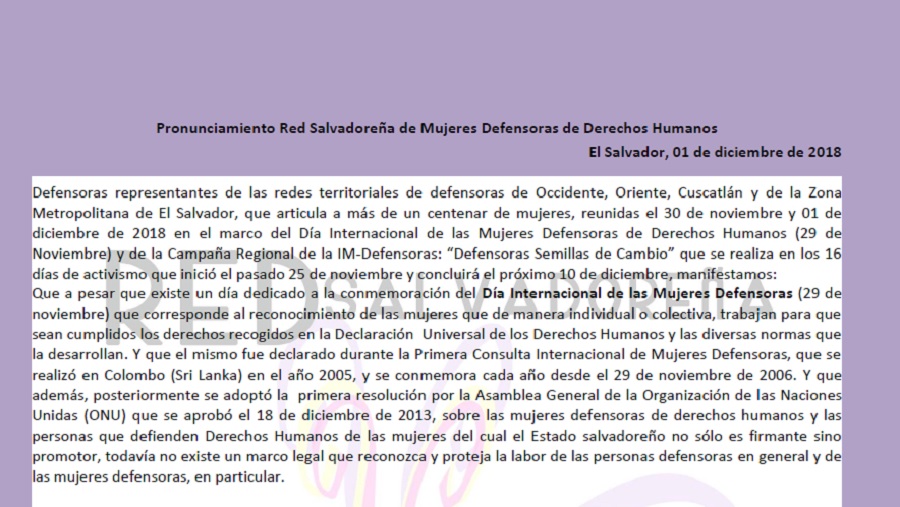 Around a hundred women representing territorial defender networks from the West, East, Cuscatlán and Metropolitan Area of El Salvador, came together from November 30 to December 1, 2018, on the International Day of Women Human Rights Defenders (November 29th) and the IM-Defensoras Regional Campaign: “Seeds of Change Defenders.” The campaign went on during the 16 Days of Activism that began last November 25th and lasted until December 10th. We declare the following:

A day exists that is dedicated to the commemoration of the International Day of Women Defenders (November 29th), which recognizes the women who, individually or collectively, work for compliance with the rights recognized in the Universal Declaration of Human Rights and related norms. This day was proclaimed during the First International Consultation of Women Defenders held in Colombo (Sri Lanka) in 2005, and has been commemorated every year since November 29,, 2006. Furthermore, the first resolution of the General Assembly of the United Nations was passed on December 18, 2013, which dealt with women human rights defenders and persons defending the human rights of women. The Salvadoran government signed and promoted the resolution, but there is still no legal framework in the country that recognizes and protects the work of rights defenders in general and women defenders in particular.

Faced with this situation, we denounce the following:

Due to all of the above, we demand the following: