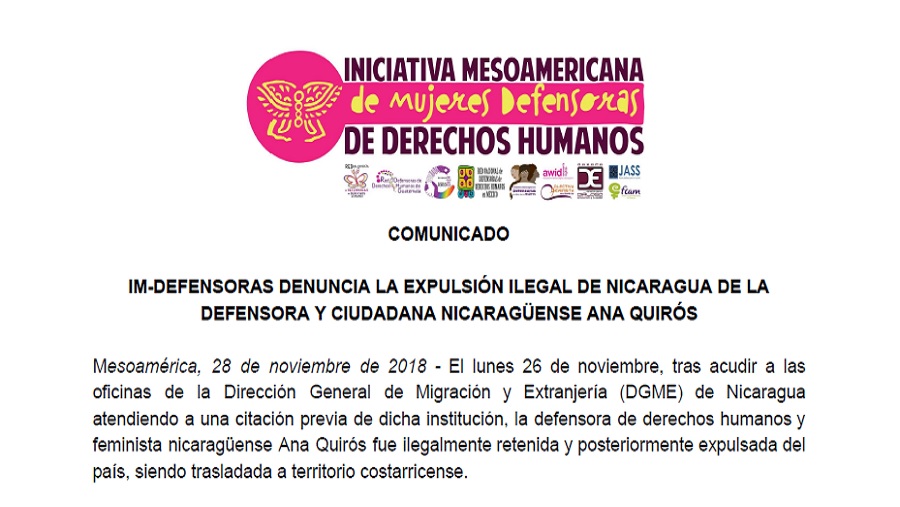 Mesoamerica, November 28, 2018 – On Monday, November 26th, after entering the offices of the Ministry of Migration and Alien Affairs (DGME) of Nicaragua in response to a previous subpoena, the Nicaraguan feminist and human rights defender, Ana Quirós, was illegally detained and subsequently expelled from the country, then taken to Costa Rican territory and left there.

Ana Quirós is an outstanding feminist activist and Director of the Center for Health Research, CISAS, with 43 years of life and work in Nicaragua, where upon arrival, she contributed to the reconstruction of the country after the armed conflict and the triumph of the Sandinista Revolution.

Despite her birth in Costa Rica, the defender’s nationality has been Nicaraguan for 20 years, and she, therefore, is a full-fledged citizen of the country. Even so, the migration authorities violated her basic rights and Nicaragua’s own laws by proceeding straight away with her deportation. They flagrantly denied her right to due process of law and even denied her right to a protective writ. Given that Ana Quirós is a Nicaraguan citizen, she should not have been deported.

This illegal, arbitrary action by the Nicaraguan government comes on top of several different attacks, including physical aggression, surveillance, and siege, to which the defender has been subjected since the beginning of the sociopolitical crisis last April 18th. These attacks have heightened recently in a campaign of disparagement, false accusations, and criminalization in social networks.

The aggression against Ana Quirós is not an isolated incident. On the contrary, it is part of a government campaign of repression and persecution against the feminist movement that has intensified since November 23rd, when Nicaraguan Vice President Rosario Murillo, made statements using hate speech to accuse and criminalize feminist women and organizations in the country.