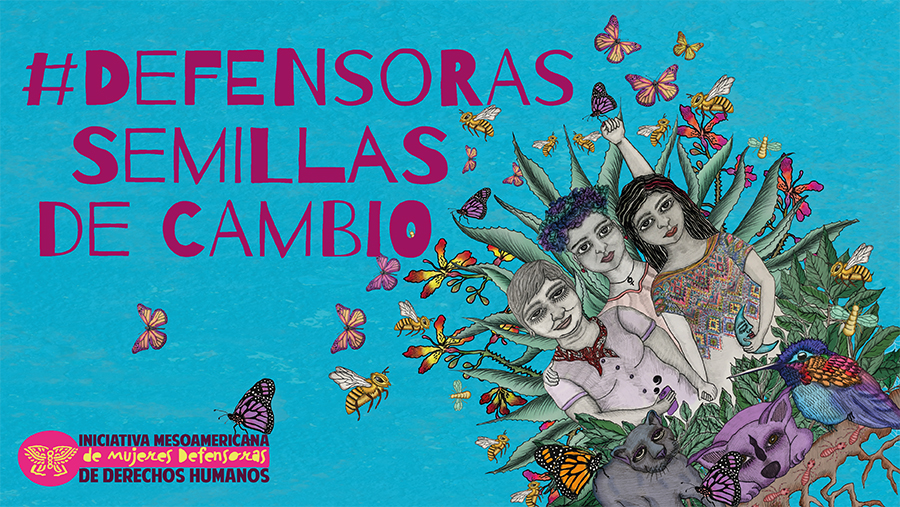 “Women defenders are our sentinels who fight for freedom, equality, and justice. If their names resound far beyond their own countries, it is because their courage, commitment and selflessness have inspired thousands around the world. They epitomize the countless defenders who, in the glare of the spotlight or in the anonymity of their struggles, have opened roads that enable all of us to enjoy our most basic rights.” Michel Forst, UN Special Rapporteur on the Situation of Human Rights Defenders

Women are in the vanguard of the struggles for equality, justice, and human rights, both individual and collective, in Mesoamerica. Indigenous, mestiza, Black, Garifuna women; women of the countryside and the city, the sea and the mountain; women who are mothers, migrants, lesbians, transsexuals; women young and old; women with the gifts of trees, birds, corn, coral… women who, from their different backgrounds, expectations and life experiences, through their work, daily struggles, dignity and resistance, and despite numerous obstacles and difficulties, contribute to building a more just and habitable world for all.

THEY are the women who defend sovereignty over our bodies and territories;

THEY are the ones who conserve, enrich and transmit our ancestral languages, knowledge and cultures;

THEY are the ones who dig up the ground under the roads and dig into the quagmire of the corrupt institutions in search of our disappeared sons, daughters, brothers, sisters, fathers and mothers;

THEY are the ones who defend the courage of the word and the right to utter it;

THEY are the ones who organize resistance; who raise their fists, hold up placards, carry banners and beat on pots and pans; who lead the marches and visit the roadblocks and barricades; who pick up a megaphone and lift up their voices; who call for talks and dialogue; who offer refuge.

THEY are the ones who are filled with spirit, who take other women by the hand, who comfort those searching for their disappeared loved ones, who have patience, who cry with rage to defeat frustration, who bury their dead and dream of life.

THEY are the ones who pay the price of the defense of life; who are pursued by those who have turned the death culture into an instrument of power and privilege; who are threatened, insulted, beaten, disappeared and killed by criminal groups, and even by the persons closest to them; who are criminalized by the State, by national oligarchies, transnational companies, large land owners, and fundamentalist churches and lobbies; who are discriminated against by this racist extractive, neoliberal, heteronormative, misogynous and femicidal patriarchy now threatened and near collapse;

THEY are the ones who document, denounce, accompany, and demand justice for each and every attack aimed at silencing the voices of sister defenders; the ones who make it clear that “If they harm one of us, they harm us all”;

THEY are the ones who have lost their fear of fear, and hence, don’t yield to mandates, imposed roles, threats, or coercion;

THEY, the women of all ages and origins, are the ones who insist on the importance of a caring and comprehensive struggle, who stress the urgency of individual changes in the exercise of power, who dance and put the revolution to music and take it to the farthest corner of the house, the community, the town, the city…

THEY are the “other ones” we need to be ourselves, know ourselves, and recognize ourselves in a “we” in which we all fit—beautiful, free and wild.

THEY are seeds of change, cultivators of hope, sowers of life, weavers of futures.

For all of this, we want to pay homage to THEM.

Because their contributions and accomplishments are and will continue to be much greater than any coup.

Because we are many women and we are organized in every corner of Mesoamerica,

Because we take care of ourselves and come together, creating support networks and projects of self-care, collective care, and healing.

Because we recognize ourselves in each other, we male our cross-cutting struggles visible, and we build alliances with other sectors of the population.

and make way for LIFE.

Because sowing together makes us stronger