WORDS ALSO HAVE THE POWER TO EMBRACE, AND IN THE NETWORK, THE WOMEN OF HONDURAS AND NICARAGUA EMBRACE EACH OTHER AND STRUGGLE TOGETHER 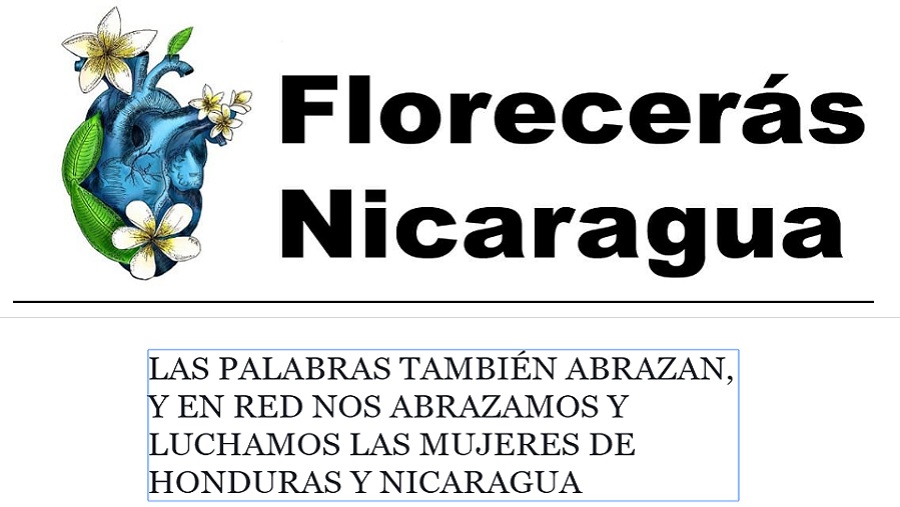 We fill the bomb crater

And sow our land again

Because life will never be conquered

National Network of Women Human Rights Defenders in Honduras – Today we wish to send words of memory, tenderness and indignation to our feminist comrades and to the people of Nicaragua. We feel that we’re there with you in the struggle against tyranny that spreads out brutally in this, our Central American territory. We ourselves are hurt by the incarceration of political prisoners, by all the people arrested, disappeared, and killed by the Daniel Ortega regime, which uses terror and hatred to carry out the plunder of Nicaragua over the bodies of men and women.

We recognize the bravery of so many sister combatants historically; although they’ve known in their own flesh and blood the harsh conditions of persecution, prison and exile, they’ve not taken one step backwards in confronting the injustices going on today.

We call attention to the women students who are organizing their struggle in assemblies, mobilizations, meetings and barricades; they remind us that we cannot give up the fight as they chant with conviction, “Out now! Out now!”

We honor the struggle of indigenous, black and campesina women, who let us know that this resistance has gone on for 500 years, that revolution is not something that happens in the future, but instead means a decent life here and now for all the peoples of the world.

We salute the historic resistance of Nicaraguan mothers, who are the great anti-patriarchal and anti-capitalist strategists. They make fun of an educational system that tames children; instead, they allow them to grow up with a utopian consciousness of a better world. They’re wayfarers of hope, the outcry on a sure and certain path, and the “never again” to dictatorships in bed, the “never again” to dictatorships in the streets. From them we learned our first Resistance when we didn´t even know the word “feminist.”

To all the comrades who make history with their struggle today in the streets, to those who sit down in front of a patrol truck as an act of resistance to keep the police from moving ahead, to those who pull others from the arms of the police to keep them from being kidnapped, tortured and disappeared. To those who are in exile and keep up the struggle from a different barricade against Ortega and other dictatorships, such as the one established in Honduras:

We want to embrace them and tell them that they are not alone, that we are here, and that together we’ll keep on conspiring against these regimes from all latitudes until we live in a free world, walking on together and weaving memories of love and war.

We call on women human rights defenders and feminists throughout the world to keep denouncing the violent attacks against the comrades in Nicaragua and demanding justice and freedom for all political prisoners.

Defense is a right, not a crime.