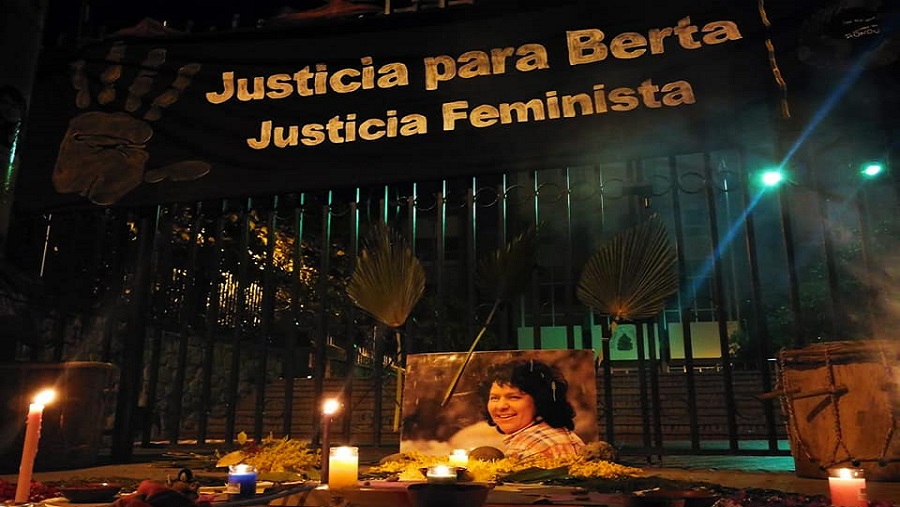 On the occasion of the trial for the political feminicide of Berta Cáceres, scheduled for Monday, September 17th, the National Network of Women Human Rights Defenders in Honduras called for a series of political, artistic and cultural events and actions to look back on the feminist struggle of the Lenca defender and demand justice.

The first of these took place on Sunday, September 16th, when indigenous women, university students and defenders belonging to the Network participated in the spiritual and artistic event entitled “Let’s wake up compañeras, Let’s wake up” outside the Supreme Court building.

On Monday, September 17th, in response to the call sent out by the National Network of Women Human Rights Defenders in Honduras and the Coordinating Group of Indigenous and Black Women of Honduras (CONAMINH), hundreds of Garifuna indigenous women came together in a mobilization to demand feminist justice for Berta Cáceres. As the compañeras in the Network said: “We have come together in this mobilization because justice for Berta Cáceres means that we are here and that together with others we will say her name out loud with all our might, and we will speak of her proposals inside and outside the court of law, so that her living memory will overpower the proceedings designed to cover up her true assassins and only blame her executioners.”.

During the Mobilization, the Defender Network sounded an alert on the arrival of approximately 200 persons paid by the DESA Corporation who shouted racist epithets against the Garifuna people and the indigenous women who had mobilized.

On Wednesday, September 19th, outside the UNAH, the National Network of Women Human Rights Defenders in Honduras held a forum “Don’t Despair, Compas.

WATCH VIDEO OF FORUM (in Spanish)

Among those who participated in the Forum were: