GUATEMALA / People have the right to protest! 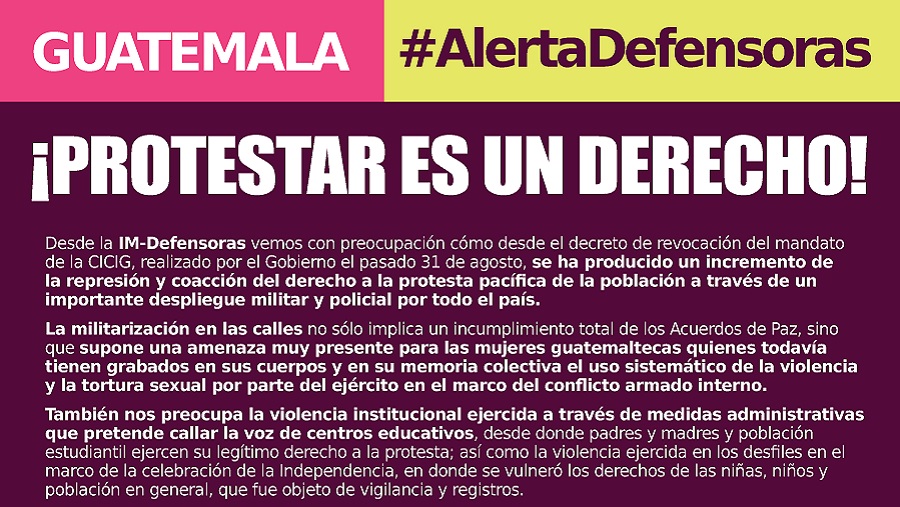 Mesoamerica, September 18th, 2018 – Ever since the revocation of the CICIG mandate by the Guatemalan government last August 31st, we of IM-Defensoras have been increasingly concerned about the way in which this has produced a rise in the repression and constraint of people’s right to peaceful protest through a major military police deployment throughout the country.

The militarization of the streets not only involves a total lack of compliance with the Peace Accords, but also entails an ever-present threat to Guatemalan women, who have the systematic use of violence and sexual torture imprinted on their bodies by the Army in the context of the internal armed conflict.

We are also concerned about the institutional violence perpetrated through administrative measures that hush the voice of people in educational centers where fathers, mothers and students exercise their legitimate right to protest; and furthermore, we are alarmed over the violence exerted in the Independence Day parades, in which the rights of girls, boys and the population in general were violated by subjecting them to surveillance and searches.

In view of the above, we demand that the Guatemalan government comply with all that is established in the Constitution, laws, agreements and commitments adopted both nationally and internationally, and specifically, that it comply with the Peace Accords and take the Army off the streets, thereby guaranteeing the legitimate right of the Guatemalan people to peaceful protest without enduring constraints or repressive acts of any type whatsoever.

And finally, we call on the international community to stay abreast of the situation in Guatemala, where democracy, human rights, the rights of women, and the work and integrity of both individual and organizational human rights defenders are at serious risk.