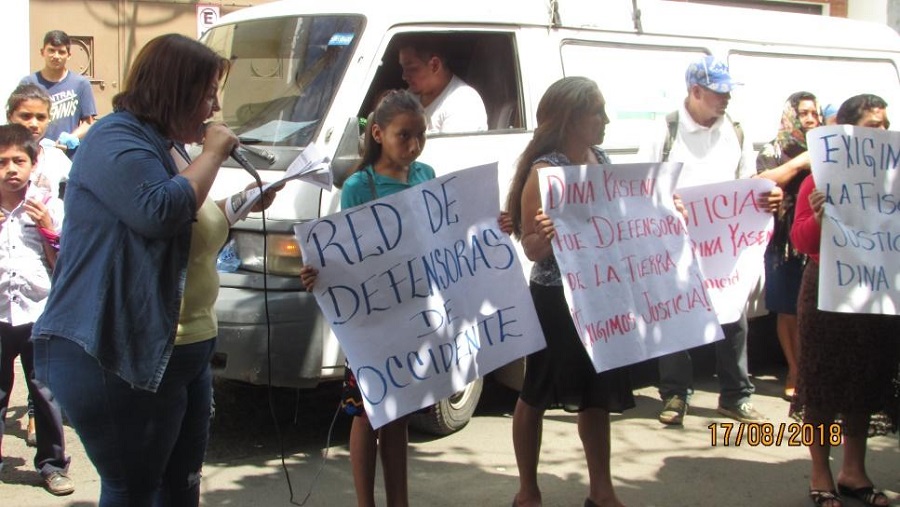 Zuleyma Araúz – On Friday, August 17, 2018, the Western Salvadoran Network of Women Human Rights Defenders held a march as part of a public action to denounce the murder of Dina Puente. On August 10th, she was killed with a firearm as she exited the latrine behind her house, presumably by criminal groups seeking to damage her image and history of work in defense of the rights to land and territory.

The march began at 9 o’clock in the morning and was attended by 130 women from the western part of the country, including the cities and towns of Tacuba, Apaneca, Acajutla, Santa Ana and Ahuachapán. The participants gathered at the detour from Ahuachapán to Tacuba, and headed for the Attorney General’s Office of Ahuachapán, where they read the Defender Network’s statement. Speakers condemned the crime committed against Dina and applauded her work as an environmental activist. They also called on the Attorney General to carry out a timely, effective investigation into the causes of her death without delay. The march then continued to the offices of the Justice of the Peace and ended in Concordia Park in Ahuachapán.

Along the way, recognition was given to the human rights work achieved by Dina Puente, and Network plans were revealed concerning the kind of support that will be shown in follow-up actions.