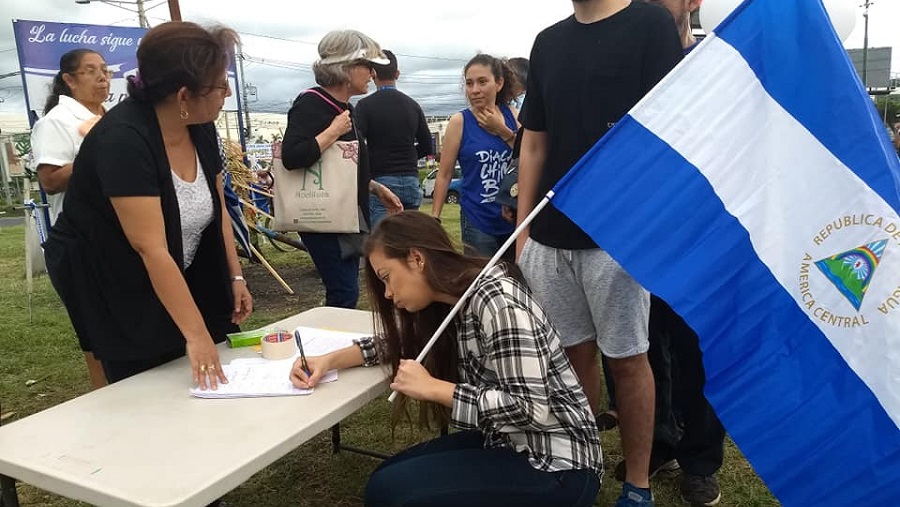 Nicaraguan Initiative of Women Defenders – On Saturday, August 3rd, in Managua and Masaya, women defenders marched together with a syndicate of health workers who had been fired in reprisal for attending demonstrations as victims of repression. During the week, they also participated in encampments along with journalists, groups seeking freedom for political prisoners, persons in mourning, and health workers. Marchers went through La Fonseca, León, El Tule and other places in the country.

In more than 100 days of protests and repression, women defenders have marched along with communities, unions, and families throughout the national territory. Many have paid a high price for exercising their rights to organize and demonstrate. Many have had to leave their homes due to besiegement, physical attacks, and attacks in social networks. With courage, they have faced personal persecution and that of their organizations, including acts of criminalization, kidnapping and torture.

It is clear that nothing has stopped the determination of thousands of empowered women defenders, conscious of their rights and struggling in the country and beyond its borders for a free, just and democratic Nicaragua in all its diversity. A Nicaragua where justice and reparations for victims will be possible at last.

On Sunday, August 5th, the people are still in the streets: Matagalpa, Mockery March. Somoto, All of Us Are Health March. Bilwi, Together We Can Win March. El Realejo, Blue and White March. Condega, March from the Catholic Church. Corinto, We’re Still in the Streets. Ocotal, March in Support of Archbishops. Mina. El Limón Marches, Too.