#WHRDAlert NICARAGUA / Arbitrary arrests of CUDJ members and other persons exercizing their right to peaceful protest in Chinandega, León, Managua, Carazo and Matagalpa 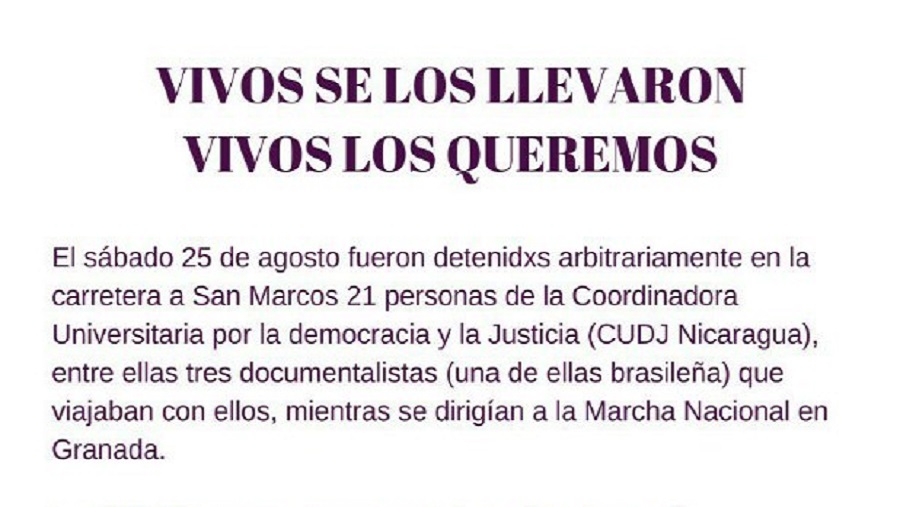 THE FACTS – According to the Nicaraguan Initiative of Women Human Rights Defenders (IN-Defensoras), more than 50 arbitrary arrests of human rights defenders occurred on August 24th and 25th in Chinandega, León, Managua, Carazo and Matagalpa, half of them related to the CUDJ.

On Saturday, August 25th, 20 CUDJ members were arbitrarily detained, including several women activists and three documentary filmmakers. One of them was a Brazilian woman on her way to the National March in Granada. They were released several hours later. The Brazilian-American documentalist was sent to the Office of Migration and Foreign Affairs to be expelled from the country.

That same day, seven persons were arrested in León, six of whom are CUDJ members who continue to be held arbitrarily despite the fact that one of them has been granted precautionary measures by the IACHR. Also in León, reports cite the kidnapping by para-police agents of Victoria Obando (Pibe), a transgender LGBTIQ+ activist and student at UNAN – MANAGUA.

We of IM-Defensoras condemn this attack against the rights to peaceful protest organization, and further condemn the current criminalization campaign through which the State is responding to popular mobilizations initiated last April 19th. We demand the release and immediate presentation of all persons still being held and hold the government of Nicaragua responsable for any harm that may befall them.

In the same vein, we repeat our call to the international community to stay abreast of what is happening in Nicaragua and to stand in solidarity with women human rights defenders, their organizations and movements.