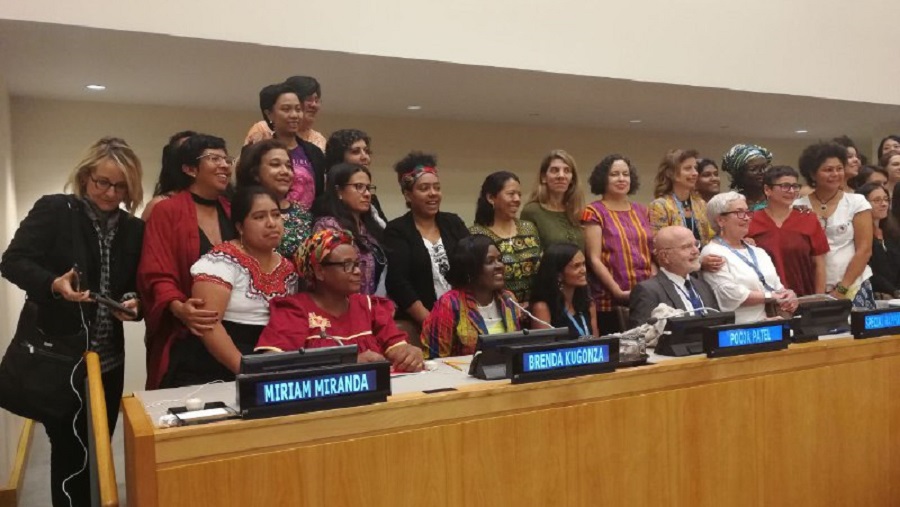 On July 24, 25, 26 and 27th, as part of our international advocacy strategy, IM-Defensoras participated in public events and high-level meetings with different UN rapporteurs and working groups in New York to mark the 20th anniversary of the Declaration on Human Rights Defenders.

On Thursday the 26th, during the 22nd session of the UN Working Group on Discrimination against Women in Law and in Practice, presided over by Elizabeth Broderick and to which the feminist Costa Rican lawyer and defender Alda Facio also belongs, we participated in the public event entitled “Responsibility of the State in the Protection of Women Human Rights Defenders.” The event was convened by several different international coalitions and organizations including the Association for Women’s Rights in Development (AWID) and JASS, both members of our Driving Group; Amnesty International; the Consortium of Urgent Action Sister Funds (United States, Latin America and the Caribbean); and the International Human Rights Service. We were able to rely on the presence and collaboration of the UN Special Rapporteur on the Situation of Human Rights Defenders, Michel Forst. Along with the voices of more than twenty defenders and activists from different countries in the world, that of our Regional Co-Director Lydia Alpízar was also heard. She spoke on the current situation experienced by women defenders in the region and pointed out some of the main obstacles faced. These include the authoritarian regression of the State, exemplified by recent cases in Nicaragua and Honduras; extraction policies that have fomented attacks on defenders of the land, territory and common assets; and the upsurge in religious fundamentalism, expressed in policies that violate women’s rights and the right of persons to decide about their bodies and their sexuality, while fostering attacks against organizations and individuals who defend the right to defend rights.

On the panel moderated by Marusia López, a member of JASS and the Advocacy Commission of IM-Defensoras, emblematic women defenders from our region also participated, such as Lolita Chávez, of the Women Defenders Network in Guatemala, and Miriam Miranda, of the National Network of Women Human Rights Defenders in Honduras. They gave testimonies on their struggles and some of the attacks they have faced in their long experience of defense work, without failing to highlight the memory of Berta Cáceres, assassinated on March 2, 2016. Next, Awid member and Coordinator of our Regional Registry of Attacks, Verónica Vidal, presented some recommendations from IM-Defensoras on what the UN and member states can do to support the protection of women human rights defenders.

We of IM-Defensoras wish to underscore the importance of participating in these spaces and positioning our proposal of comprehensive feminist protection. One of the main lessons we have learned 20 years after the adoption of the Declaration on Human Rights Defenders is that the advocacy and contribution of feminist organizations has been critical in incorporating indispensable elements such as a gender focus. One fruit of this is undoubtedly the adoption by the UN General Assembly in 2013 of the resolution Protecting Women Human Rights Defenders.