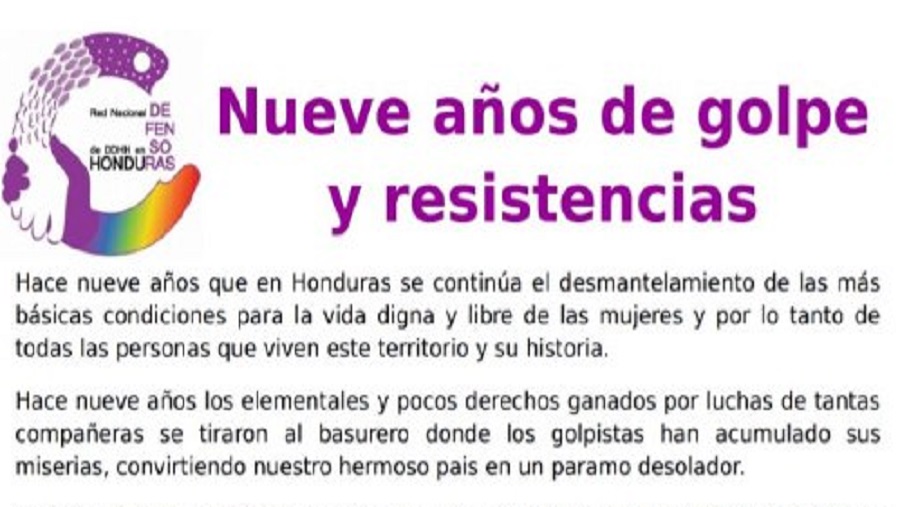 National Network of Women Human Rights Defenders in Honduras – For the last nine years the most basic conditions for a free, respectable life for women in Honduras have continually been dismantled, thereby affecting all the people who live in the territory and their history.

For the last nine years, the few basic rights won through the struggles of so many sisters have been thrown on the trash heap where the perpetrators of the coup have amassed their vile deeds, thereby converting our beautiful country into a barren plain.

Their atrocities have been carried out against our desires and projects for justice and dignity for women and for our people. It costs more to live, our lands are dispersed, and our bodies parceled out to the powers that be: the patriarchy, reactionary churches, extraction enterprises, repressive forces and conservative institutions in collusion.

All the while, Honduran women resist. In our defense against the plunder of water, food and land; in our struggles to decide about our own bodies, spirituality and sexuality; and in our efforts to radically eliminate violence in our families, schools, streets, parties and social movements, we understand that it is more crucial than ever that our struggle as women not be pushed behind other struggles, because all are urgent and because our lives are at stake.

The coup opened up an enormous door through which riches and impunity entered for the benefit of those who now maintain the same policies in state institutions where the dictatorship is consolidated.

All we can do is struggle, said Berta Cáceres, and as we take on her strength and that of all the other women who have been killed, held prisoner, disappeared, forced to migrate, or hidden, and as we take on their voices to note, accuse, organize, defend and struggle, we rebellious, creative, beautiful women remember: NO COUP D’ÉTAT and NO COUP AGAINST WOMEN!

Since June 28, 2009, many women, rights defenders, feminists, and all who resist the oppression of the racist and capitalist hetero-patriarchy have also learned that Honduras will be feminist or it will be nothing at all, because it will never be possible to have a country without justice for us, and that has to be now, everywhere, in all the struggles.