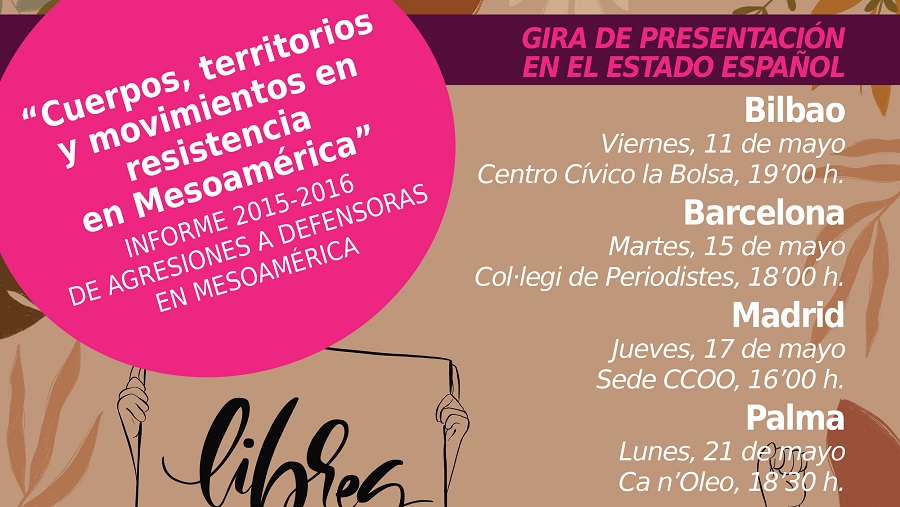 Between May 11 and 21, the Mesoamerican Initiative of Women Human Rights Defenders (IM-Defensoras) will visit several European cities to present their report “Bodies, territories and movements in resistance in Mesoamerica. Report on 2015-2016 attacks against women human rights defenders”.

The tour, which has been organized by the Calala Women’s Fund and Front Line Defenders with the support of the Municipality of Barcelona and the ACCD (Catalonian Agency for Development Cooperation), will include visits to Bilbao, Barcelona, Brussels, Madrid and Palma, where in addition to offering public conferences, the IM-Defensoras delegation will meet with representatives and bodies of the European Union and the Spanish State.

Prominent Women Human Rights Defenders from the region will explain their cases and provide background on the broader context in their respective countries. They are Sandra Peniche, a Mexican defender of sexual and reproductive rights who was recently the target of attacks in Yucatan; and Sonia Sánchez, Salvadoran territorial defender whose criminalization and judicialization case has become paradigmatic in the region.

The IM-Defensoras report, based on data from the IM-Defensoras Registry of Attacks on Women Human Rights Defenders in El Salvador, Guatemala, Honduras, Mexico and Nicaragua, shows that during 2015 and 2016 there were 2,197 attacks against Women Human Rights Defenders in the region, a 30% increase compared to the previous period when 1,688 attacks were recorded. Most of these acts of aggression took place in Guatemala, Mexico and Honduras, countries where the number of such incidents doubled between 2015 and 2016.

In keeping with the trends detected in prior reports, the land, territory, and natural goods defenders remain the ones most targeted in the region. State actors remain the main aggressors against Mesoamerican women defenders with police, members of the military, officials and authorities at various levels of government accounting for 54% of the perpetrators.

In the two-year period covered by the study, the number of cases of aggression almost doubled from 735 in 2015 to 1,462 in 2016. Though no complete tally has been compiled for the 2017-2018 period, a further expansion of such cases is already apparent. Mexico has just experienced its most deadly year in modern history with more than 25,000 killed in 2017. Honduras ended the year with a post-election conflict marked by confrontations on the part of police and military forces, and in Nicaragua and more than 40 people have already been killed and dozens disappeared amid protests against efforts to reform the country’s social security system. The women defenders who will be speaking during the tour are:

● Sandra Noemí Peniche Quintal, National Network of Women Human Rights Defenders in Mexico. Sandra is founder and director of the organization Servicios Humanitarios en Salud Sexual y Reproductiva, based in Merida, Yucatan, providing medical services from a feminist, public health and non discriminatory focus. Sandra is a practicing surgeon, sexologist, colposcopist and feminist. On March 13, 2018, someone linked to conservative and religious fundamentalist organizations tried to murder her with a bladed weapon.

● Sonia Jeannette Sánchez Pérez, Network of Women Human Rights Defenders in El Salvador. A recognized Women Human Rights Defender in Santo Tomás municipality, south of the Salvadoran capital. Sonia is one of the leading defenders of natural goods in the “El Porvenir” canton, where she has been in constant struggle since March 2015 in the defense of the territories and environmental resources threatened with destruction by Inversiones Roble company’s “Brisas de Santo Tomás”, urban development project.

● Marusia López Cruz, a full time advisor to the JASS Global Defenders Program and a member of the governing board of the Calala Women’s Fund and Protection International. A Mexican feminist who has work for 20 years in feminist and human rights organizations at the national, regional and global levels. She holds a Bachelor’s in ethnology and a Masters in gender and development. She currently works in the Power and Protection department of JASS (which belongs to IM-Defensoras) systematizing and facilitating the exchange of experiences in protecting Human Rights Defenders.

● Verónica Vidal Degiorgis: Is the Solidarity Tactic Lead at The Association for Women’s Rights in Development (AWID) and since 2014 coordinator of the IM-Defensoras’ Registry of Attacks Against Women Human Rights Defenders. She is a Uruguayan and Latin American feminist, resident in Mexico since 2004. She olds a BA in International Relations and a Master Degree in International Cooperation for Development and counts with over 15 years of experience in research and advocacy in the fields of development, funding of women’s rights organizations and violence and protection of WHRDs from a feminist perspective.