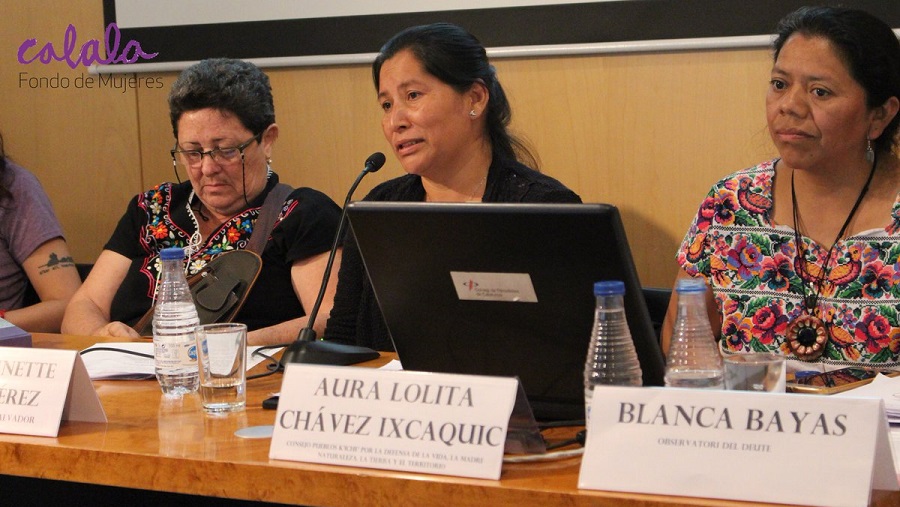 Between 11 and 21 May, a delegation from the IM-Defensoras, composed of our co-directors Lydia Alpízar and Teresa Boedo, the women human rights defenders Sandra Peniche (National Network of Women Human Rights Defenders in Mexico) and Sonia Sánchez (Salvadoran Network of Women Human Rights Defenders), Verónica Vidal (AWID, Coordinator of the Mesoamerican Aggression Registry) and Marusia López (JASS, International Advocacy Commission of the IM-Defensoras), has been on tour in different cities of the Spanish State and Europe to present our Report “Bodies, Territories and Movements in Resistance in Mesoamerica. 2015-2016 Assessment Report on Attacks against Women Defenders,” (for now only available in Spanish) and to make known the situation that we women human rights defenders are experiencing in Mexico and Central America. On Friday, May 11th, we started off in Bilbao, invited by Mugarik Gabe and CEAR Euskadi, where  Lydia Alpízar and Marusia López presented the report along  the Guatemalan defender Lolita Chávez, now given refuge in the Basque Country, and Cony Carranza, of the Global Women’s March.

On Tuesday, May 15, we were in Barcelona, where  Teresa Boedo and Veronica Vidal presented the Report, while defenders Sandra Peniche, Sonia Sánchez and Lolita Chavez, members of networks in Mexico, El Salvador and Guatemala, respectively, presented their particular cases and spoke of the situation in their countries.

On Wednesday, May 16, the tour arrived in Brussels, seat of the European Union, where we held a number of different meetings with representatives of the European Parliament and international organizations based there.

In Madrid, on Thursday, May 17th, the the Workers’ Commissions (CCOO) hall was filled with members who came to listen to our comrades, accompanied by prominent activists from the Spanish State, including Yayo Herrero, Laura Medina and Miriam García-Torres, and the Peruvian activist Rocío Silva Santisteban. The following day, Friday, May 18th, Teresa Boedo, accompanied by Sandra Peniche, Sonia Sánchez and María San Martín, of Front Line Defenders, facilitated a workshop on comprehensive feminist protection, organized by Calala and Eskalera Karakola. One remarkable fact is that on Tuesday the 15th, and Thursday the 17th, the hashtags #InformeDefensorasMeso2016 and #DefendamosALasDefensoras were on the list of Twitter trending tòpics in the Spanish State.

The tour concluded on Monday, May 21st, in Palma, capital of the Isle of Mallorca, where we were invited by the Office of Cooperation of the University of the Balearic Islands, and had the opportunity to meet with the Mayor of the city. We were accompanied by defenders Ruth Escribano (UIB) and Margalida Ramis (GOB Mallorca) in a public event, where we presented our Assessment Report on Attacks against Women Defenders. We wish to express our gratitude once again to all the comrades and organizations who made this possible, and especially to the Calala Fund and Front Line Defenders.