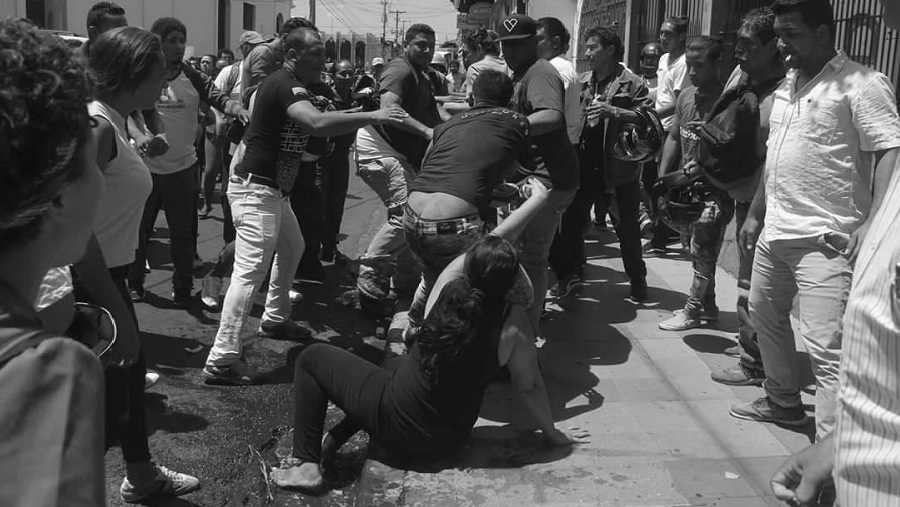 THE FACTS – On Wednesday, April 18th, IN-Defensoras and other human rights organizations and networks in Nicaragua documented and denounced a large number of violations of the right to protest, including physical attacks, threats, acts of intimidation and violations of the right to information, in the context of demonstrations called against the imposition of the Social Security reform by the government.

Defender Ana Quirós, Executive Director of the Center for Information and Consulting Services on Health (CISAS) was attacked by pro-government groups, with the acquiescence of the National Police, resulting in a number of fractures and wounds on her body.

Sara Henríquez, a member of Mujeral en Acción (A World of Feminist Women in Action), denounced in social networks that after experiencing acts of repression in the morning while trying to peacefully demonstrate, assailants tied to the authorities of the National University of Nicaragua (UNAN) at León Flor Valle went to her house, threw rocks and insulted her with shouts of “Sara Henríquez, traitor, selling out her homeland!”.

It was reported that pro-government groups riding on government buses intimidated, attacked and took cameras and cell phones from demonstrators with the complicity of the police.

Students on scholarships from the Leon campus also denounced having received threats of losing their scholarships if they did not go to Managua to support the government.

As of now, it has been confirmed that at least 20 persons have been seriously injured by members of the security forces and pro-government groups.

We, of IM-Defensoras condemn these actions and demand an immediate end to repression against those who exercise their legitimate right to protest. The government is obliged to guarantee their integrity and their right to protest, and for this reason, we hold it responsable for attacks and violations of human rights against all demonstrators and human rights defenders, including the attacks perpetrated by civilian supporters of the government.

We call on the International community to stay on the alert in the face of this new wave of repression in Nicaragua.