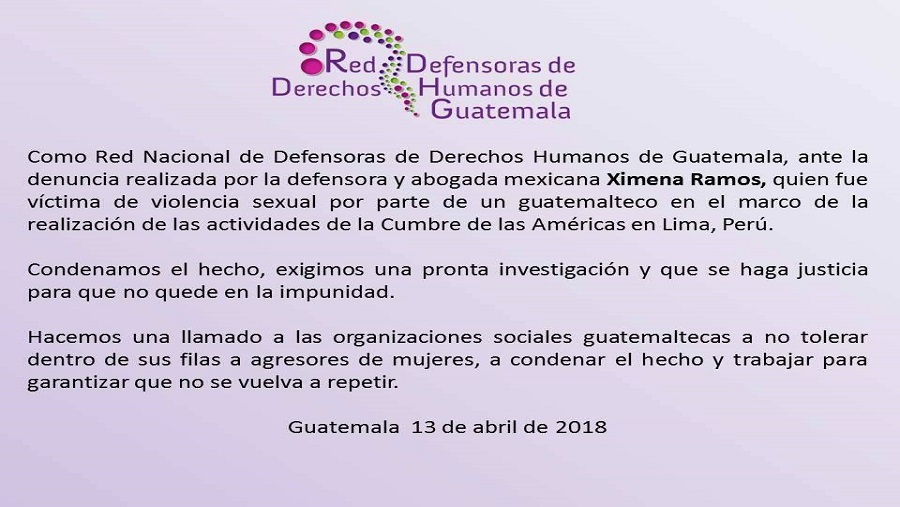 Last April 12th, Ximena Ramos denounced in the social networks that a person identified as Erick Armando Cu Caal, of Guatemala, entered her room and tried to sexually abuse her after a day of work with the Special Rapporteur on the Freedom of Information of the Inter-American Commission on Human Rights (IACHR) at the Summit of the Americas, in which the aggressor also participated.

Incidents of abuse, harassment, and sexual attacks in mixed work spaces of our social organizations and movement, far from being isolated, are often made invisible and even normal by the patriarchal culture that continues to underlie settings such as those related to human rights and social transformation projects, where, in theory, they should have been totally abolished. Such forms of aggression not only deeply affect the work of the defenders who experience them, but also place the credibility and legitimacy at risk of the social organizations and movements where they occur.

We, of IM-Defensoras consider it a matter of vital importance that such attacks are neither silenced nor left in impunity. And so, in addition to our repudiation and total condemnation of what happened, we applaud and celebrate the determination of Ximena Ramos to make a public denunciation of the facts, and we offer her all our feminist support, backing and sisterhood.