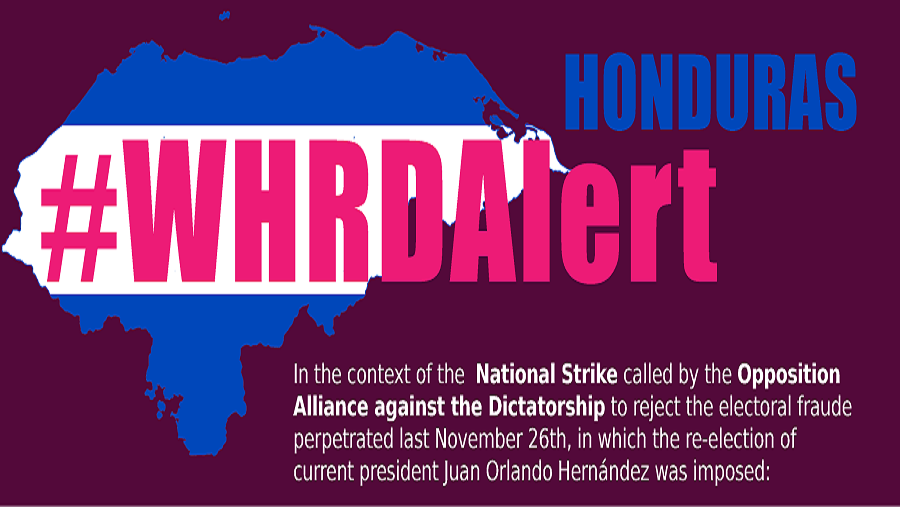 Mesoamerica January 31, 2018 – More than a thousand women human rights defenders in El Salvador, Guatemala, Honduras, Mexico and Nicaragua who make up the Mesoamerican Initiative of Women Human Rights Defenders (IM-Defensoras), are writing to you to express our concern over the grave situation of State repression and violence and the infringement of human rights going on in Honduras since the presidential elections were held last November 26th. All this is continuing during the citizen mobilizations sparked by irregularities, lack of transparency and uncertainty over the election’s results.

Evidence of these irregularities was provided by the OAS Electoral Observation Mission, which concluded in its report that the “irregularities, errors and systemic problems surrounding this election do not allow the Mission any degree of certainty in determining the results,1 and accordingly, the Secretary General of the OAS has called for new elections.2

Despite the protests, as well as the conclusions and warnings of official human rights entities and those of a multitude of national and international organizations, the government of Honduras opted to proceed with the process of the validation of results that verified the re-election of the current president, Juan Orlando Hernández, and heightened his campaign of repression, violence and harassment against citizens, as well as the defamation and stigmatization of human rights leaders, organizations and defenders throughout the country.

Thus, on December 1st, the government approved Decree Number 084/2017, which suspends guarantees established in the nation’s Constitution,3 imposes a curfew, prohibits freedom of movement, establishes control over the news media, and gives legitimacy to the use of violence against the population by security forces. And according to the IACHR, all this is happening despite the fact that “The suspension of guarantees totally lacks legitimacy when utilized to put an end to the democratic system or when it ordering insurmountable limits to the ongoing validity of certain essential rights of the person.”4

As a result of the suspension of constitutional guarantees and the systematic use of State violence to repress protests, data collected by the National Human Rights Commission reveals that as of January 19th, at least 31 persons have been killed. Likewise, human rights organizations have documented more than two hundred people wounded by firearms or brutally beaten by security forces, a thousand people arrested, and a rise in the cases of cruel and inhuman treatment;5 moreover, attacks and smear campaigns have been registered against outstanding activists, journalists and women human rights defenders who have taken a stand against the electoral fraud.6 It is important to note that many of these have been perpetrated by Army troops, a fact that has recently prompted the spokesperson of the High Commissioner for Human Rights of the United Nations to voice her concern.7

The recent National Strike convoked by the Opposition Alliance to the Dictatorship to be carried out from January 20th to 27th, has touched off a new wave of State violence and repression, yet the government has turned a deaf ear to the international calls and recommendations for the use of dialogue and non-violence. The Army is still in the streets, and the number of people killed, wounded, arrested, pursued or harassed continues to rise.

In the face of this highly serious situation, which implies a general violation of the human rights of all Hondurans, we of IM-Defensoras urge the Rapporteurs on the situation of Human Rights Defenders of the UN and the IACHR to use their diverse spheres of influence to pressure the government of Honduras to do the following: