STATEMENT National Network of Women Human Rights Defenders in Mexico / #29November. In Mexico, an attack every day against women defenders 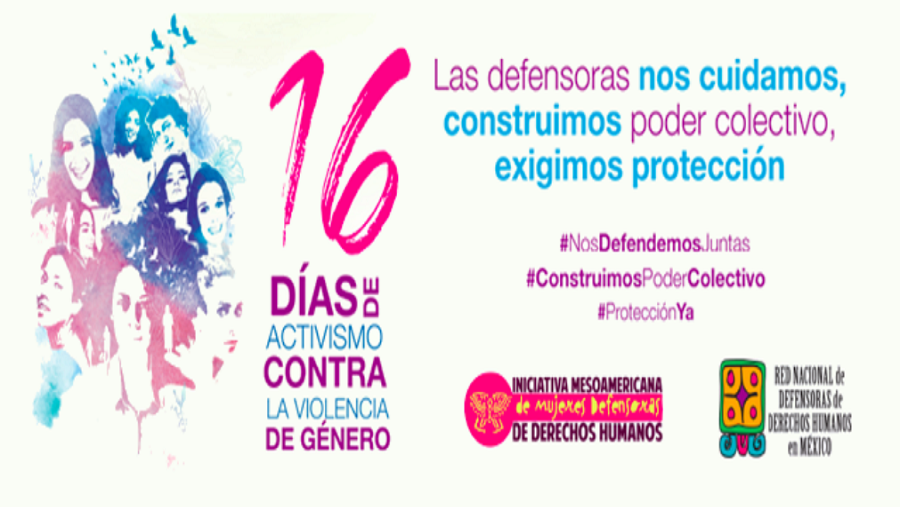 Mexico is the most violent country for women human rights defenders in Mesoamerica. From 2013 to 2016, that is to say, during the six-year term of Enrique Peña Nieto, a total of 1, 360 attacks against women defenders occurred, an average of one a day. This figure is higher than those registered for Honduras, Guatemala and El Salvador in the same period: 1, 009, 738 and 173, respectively.

In the framework of the 16 Days of Activism against Gender Violence Campaign, we members of the National Network of Women Human Rights Defenders in Mexico (RNDDHM)[1] strongly condemn such violence. Moreover, we have ascertained that our main aggressors are public servants, mainly police agents who, paradoxically, are responsible for safeguarding our integrity and rights.

It fills us with rage to verify that, far from coming to an end, these violent acts against us are increasing. In the first year of the Peña Nieto regime, 189 attacks were committed against women defenders; this tripled in 2016, with 550 cases.

No doubt about it: Our struggles, diverse and powerful, for the benefit of people who inhabit the planet, principally those in situations of marginalization and/or inequality, are constantly targetted. And we, the weavers of a world that is both other and possible, suffer violence in an effort to inhibit our transformative power.

If we add to this maelstrom of terror the fact that 22 of our defender comrades have been killed as of now in this regime[2] and 22 more have suffered attempts on their lives, it seems that there’s no hope. But there is. Our march has no end. We grow stronger in the midst of chaos: #WeDefendOurselvesTogether #WeBuildCollectivePower.

Today, November 29th, the International Day of Women Human Rights Defenders, we women defenders in Mexico publicly denounce and repudiate the violent attacks that we experience as a result of our work and our gender condition. These include those that come from our own organizations, communities and social movements due to our defiance of patriarchal laws [3].

In 35 per cent of the cases of violence registered between 2013 and 2016, clear elements of gender discrimination exist. These include, for example, threats of sexual violence; smear campaigns using sexist, macho language; threats of attempts against our children; and harrassment in social networks through messages or images with a sexual connotation.

We also choose the International Day of Women Human Rights Defenders to honor our 22 comrades who were killed [4] in order to paralyze their struggles. But given that death is accompanied by life, their consciousnss and strength is our legacy. They live. Their struggles go on. Their deep roots sustain us.

Last January, in his report on the closure of his mission, Michel Forst, Special Rapporteur of the ONU on the Situation of Human Rights Defenders, referred to Mexican women defenders as women who “are in the vanguard of battles for human rights, even though their work may be invisible.” Likewise, he publicly recognized the importance of what we do as a network, saying, “ This has been crucial in helping women break the circle of violence and stigmatization and has offered many opportunities for self-protection and fomented the creation of capacities.”

We women defenders in Mexico trust in ourselves, our capabilities and power, and our own strategies and protection mechanisms. This is our wager.

We demand that the State comply with its obligation in Mexico to guarantee our right to defend rights in conditions of equality, security and dignity: #ProtectionNow. Better said, we demand that the State end its violence against us, as we note that according to the Mesoamerican Registry of Attacks against Women Human Rights Defenders [5], as many as 631 State agents attacked us during this regime [6].

[2] Among them, four women journalists and four trans women

[4] The most deadly states for women defenders are: Guerrero, with five murders; Mexico City and Tamaulipas, with three each; and State of Mexico, Puebla and Hidalgo, with two, respectively. These are followed by Chihuahua, Veracruz, Sinaloa, Nuevo Leon, Yucatan and Hidalgo, with one murder each

[5] Given the absence of oficial statistics on attacks experienced by women defenders, the RNDDHM, in cooperation with the Mesoamerican Initiative of Women Human Rights Defenders, developed the Mesoamerican Registry of Attacks against Women Human Rights Defenders, an instrument in which we record systematized figures on the attacks that we women defenders and journalists suffer