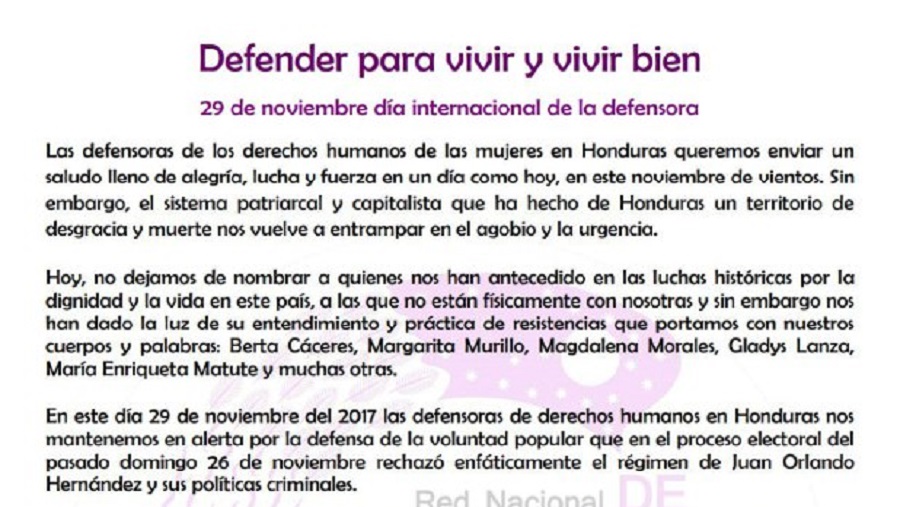 Defending in order to Live and Live Well

The women human rights defenders in Honduras would love to send you all greetings full of happiness, struggle and energy on a day like today in windy November. Nevertheless, the patriarchal, capitalista system that has turned Honduras into a territory of shame and death once again leaves us tangled in stress, strain and urgency.

Today we cannot fail to name those who have gone before us in the historic struggles for dignity and life in this country, those women who are not physically with us, but who have given us the light of their understanding and practice of resistance that we carry in our bodies and words: Berta Cáceres, Margarita Murillo, Magdalena Morales, Gladys Lanza, María Enriqueta Matute and many others.

Today, November 29, 2017, we women human rights defenders in Honduras are still on the alert, defending the will of the people shown in the elections on Sunday, November 26th, when they emphatically rejected the regime of Juan Orlando Hernández and his criminal policies.

Ever since the coup d’etat of 2009, those who have held State power have done nothing but bring persecution, death and suffering to us women who struggle to live and live well. In yet another act of the historic rebellion by the Honduran people, the machinery of power, militarism and corruption displayed by the regime was defeated peacefully, democratically and joyfully, with an extremely high participation of women voters at all levels.

Today, when we should be engaging in other actions to celebrate International Women Defender Day, we must send a message of strength and solidarity to our Honduran comrades and a new international denunciation against the illegal actions that the government of Juan Orlando Hernández continues to commit with his threat to use the repressive police, military and judicial forces against our comrades, who are a vital part of collective, territorial struggles.

Once again, we call for international watchfulness and condemnation of the current repression in Honduras and the threats hanging over those of us who struggle.

We embrace women defenders in all parts of the world, and in so doing, gain feminist force and resistence ourselves.